If you felt at least somewhat satisfied or soothed by the last two dud Star Wars films…
That is, if rock-like dialogue, mummified performances, crazy-beehive CG action scenes and a general skewing to a twelve year-old mentality hasn’t presented too much of a problem, Star Wars: Episode 3 — Revenge of the Sith probably won’t feel like too much of a burn.
For this sixth and final Star Wars feature, franchise creator and originator George Lucas hasn’t come up with any fresh surges or inspirations. 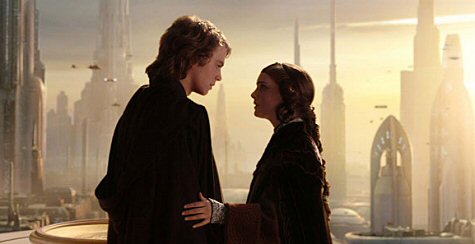 Here he is taking his Last Big Shot, and he just can’t break through the restraints of his conservative instincts and modest writing-and-directing abilities.
For a lot of people out there, this will be good enough (among them my former boss Kevin Smith, who raved after seeing it last week) and it’s okay with me. You know…whatever.
The fact of what Revenge of the Sith is….the big finale of a six-part sci-fi adventure saga that began 28 years ago…delivering the Big Payoff in fulfilling a tale foretold in The Empire Strikes and Return of the Jedi…depicting at long last the beat-by-beat of Annakin Skywalker’s final descent into the fires of anger and ego, leading to his transformation into the malevolent Darth Vader…can’t help but bring a certain satisfaction.
< ?php include ('/home/hollyw9/public_html/wired'); ?>
And it kind of does. Sort of. But oooh, man…the stuff you have to sit through. Roughly two hours and 15 minutes worth, not counting the end credits.
Which not that many people stayed for, by the way, at Thursday afternoon’s all-media screening at Manhattan’s Zeigfeld Theatre. (Which started 40 minutes late, by the way…incredible.) An awful lot of people got up and bolted as soon as the words “directed by George Lucas” hit the screen.
I wasn’t feeling much of a current in the room, frankly. There were a couple of woo-hoo! moments involving Yoda, and maybe one other. Every now and then an especially awful line was laughed at. The biggest hoot was in response to a line spoken at the very end by poor Jimmy Smits, about how he and his wife have always….whoops, forgot. No spoilers. 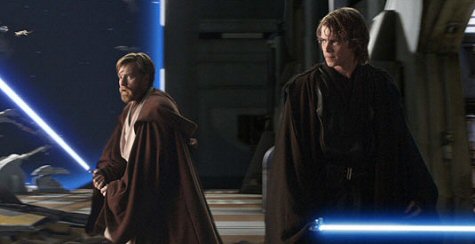 The immaculate CG delivers the usual eye-candy splendor, as usual, but c’mon…this is another woefully stiff, broomstick-up-the-butt sci-fi soap opera with the actors clearly suffering from having to mouth George Lucas’s hokey dialogue, and the only relief coming from the frantically busy visuals and the numerous action scenes.
These are more or less the same things that people were complaining about with The Phantom Menace and Attack of the Clones, right?
Sith is not a flat-out disappointment, but for anyone looking for that Big Uptick, for that sense of profound fulfillment and emotional finality with everything falling into place with and the meaning of it all….jeez, enough with the verbose pussyfooting. As the output of George Lucas goes, this is a somewhat grander, slightly more emotional, probably more necessary-to-see piece of shit.
The trades are already out with their reviews, and I’m presuming the dailies will run early-bird reviews (as they did with Phantom Menace and Clones), and David Poland went up last night with a reaction, so it seems fair to run something now as long as I don’t spoil.
Sith is critic-proof and certain to whup box-office ass, so what difference does it make what anyone says now or next week or the day before it opens (May 19th)?
The problem…the menace…is George Lucas, the big Star Wars Kahuna over the last 30 years who unfortunately insisted writing (with the help of polishers) and directing the three prequels.

It wasn’t his determination to make the Star Wars play like Saturday-matinee serials that messed things up, but his inability to make the dialogue (even with alleged ghost-writer Tom Stoppard doing polishes) feel the least bit alive or angular in any way, or direct his actors in a way that doesn’t feel like showroom furniture arrangement.
Not to mention Lucas’s catastrophic decision to cast Jake Lloyd and Hayden Christensen as the two Annakin Skywalkers.
I’m not even sure the visuals are all that great, really. For all the ambitious design and detail and organic-looking textures, it basically belongs to the video-game world. All the fervor and inspiration that comes from having lots and lots of money to spend on complicated digital effects is relentlessly on view.
Remember those creaky old action sequences in Star Wars and The Empire Strikes Back when, say, three or four Empire star-fighters were chasing the Millenium Falcon here and there? Now we have scenes with hundreds of different vessels roaming around and blasting each other willy-nilly.
The idea seems to be that more is more. Over and over we’re shown this and that variation of a galactic traffic jam, and I don’t understand why Lucas and his ILM flunkies think that visual busy-ness and chaos in the skies is so cool.
Star Wars: Episode 3 — Revenge of the Sith is a prisoner- of-war movie. It’s about war (or, according to the narration crawl at the very beginning, “War!”) and the actors are prisoners in it. Jailed by George Lucas’s down-on-your-knees dreadful dialogue, and being well paid for their trouble. 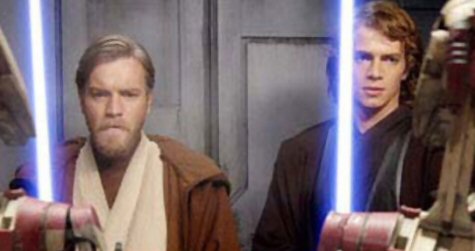 Samuel L. Jackson has spoken in interviews about his character, Mace Windu, meeting his end in this film, so I don’t think this counts as a spoiler. I felt relief for the poor guy when he finally checked out. I thought to myself, “He’s free”…because he looked so miserable when alive.
There are two performances from Ian McDiarmid as Supreme Chancellor Palpatine — one very good, one excessive. He’s much better at being insinuating and diplomatic in the first half…before his character goes through a certain evolution and Lucas tells him to pull out the stops.
Natalie Portman, who seems to be suffering as much as Jackson, has a childbirth scene at the end. (C’mon…everyone knows she’s the mother of Luke and Leia.) I think it’s fair to call this scene the most unrealistic and unconvincing childbirth scene in cinema history.
There’s a scene in which a certain warrior gets his head cut off, but Lucas chickens out and doesn’t show the head rolling across the floor. I understand wanting a PG or PG-13 rating and all, but why write a beheading scene in the first place if you don’t intend to show it?
(On the other hand, Lucas was right not to show a scene in which a bunch of kids get light-sabered to death. This scene has been spoiled all over the place, by the way, so don’t yell at me.)
Just before the climactic battle between the Sith and the Jedi begins at the beginning of Act Three, there’s an order given to the Empire troops by a certain evildoer to commence “attack plan 66” (or something very close to that). I guess Lucas decided to leave off the third “6” because he didn’t want the allusion to seem too obvious.

Don’t get taken in by those clips and stills of a wookie army. Lucas has given Chewbacca the shaft in this film. He and his brethren are barely in it.
Some will be calling this the best of the prequels. Okay, maybe…but that’s not saying much.
There will be others calling this the most emotional of all six films. It is that, I suppose, but I didn’t feel all that much. And it’s not like I can’t feel anything from these films.
I don’t think the light-saber duels mean very much any more. They’re inventively staged here, but they’re just light-saber duels. They’ve burned themselves out.
Just because a franchise continues to sell tickets and merchandise doesn’t mean it’s not over. Just think…no more new Star Wars features from here on, and that’s probably for the best. It’s all going to TV next. Good move.

“I think you can’t trust trailers any more. I think we’re all falling prey to the cutting, which can be very manipulative and often extremely false. You may remember that the Phantom Menace trailer made it look like it was on the level of the previous films, possibly even The Empire Strikes Back.
“I think Revenge of the Sith does look better than the last two pieces of shit Lucas put out but there is one warning sign that I picked up on: the dialogue scenes.
“Once again it looks boring and talky. And every line of dialogue is delivered with two people standing side by side. None of the dialogue is taking place during a real scene of any kind. Just two people standing around.
“This is exactly the horrible template Lucas used in the past two films. Some action scenes interspersed with a bunch of boring, lame after-school-special quality dialogue.
“Like you, I’m buying into the marketing and the hype but mostly the hope. I hope to God it doesn’t suck.” — Rich Elvers

Chicago Tribune writer Mark Caro ran the following interview piece about the link between Ben Affleck, Darth Vader and Revenge of the Sith in May 5. I’m rushing for a train so I can’t take the time to provide a link — I’ll put it in later today.
The article is called “Dark Lords: Anakin, Affleck”:
“For those who griped that the Star Wars movies have been too kiddie, here comes Star Wars: Episode III–Revenge of the Sith.
“The flick will be the first PG-13 movie of the series, and not only features Anakin Skywalker’s bloody mutilation, but also (SPOILER ALERT!) his taking a light saber to the junior Jedis in training. It happens off-camera, though.
“Chatting Wednesday at George Lucas’ scenic Skywalker Ranch north of San Francisco, where the movie was unveiled to journalists the previous night, producer Rick McCallum came up with an interesting analogy for Anakin’s actions. 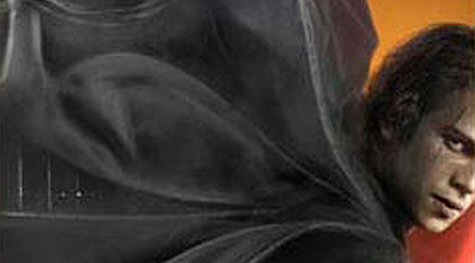 “Q. Do you think some audiences are going to have a problem with Anakin mowing down a bunch of kids?
“A: He has to kill those kids because that’s the only way he can get that power to be able to eventually work with Palpatine [the dark lord] to figure out a way to save his wife.
“He does it for kind of the right reasons, but if you put it in perspective, I always think of it as like watching Ben Affleck and Matt [Damon]. They wrote this thing [Good Will Hunting], they have this background together, they grew up together, they’re best friends, and they’re two totally different human beings right now. One is laid back, cool, does his work, works as best as he can, tries to be a good actor. The other one has taken the Dark Side, the dark route. It’s just amazing.
“Q: Because Ben Affleck has embraced the whole celebrity aspect?
“A: Yeah, the power thing.
“Q: He hasn’t killed little kids, though.
“A: No, but, can we take this out of [real] Ben? Take the hypothetical Ben in three or four years…career down the slide…and he’s given a choice to be able to resurrect his career, which is probably the most important thing to him, the fame aspect of it. Would he do anything? Who knows?”