The first thing I saw on the iPhone after coming out of my second viewing of State of Play this afternoon was the NC-17 rating given to Sacha Baron Cohen‘s Bruno. This is surprising? What kind of rep would this 7.10 Universal release have if the MPAA’s ratings board had given it a nice obliging R? Please. 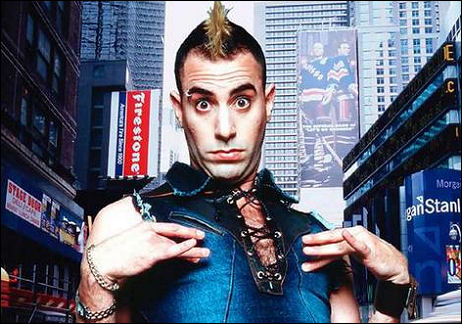 The idea with Bruno is to make average folks in all socio-political realms (i.e., not just red-state males) cringe and go “eeeww!”, and to do that right it has to top the naked wrestling “eewws” in Borat, so what else could have happened?

Why can’t U.S. society at least be more like Sweden or Denmark? They aren’t so wang-averse over there. I thought that Billy Crudup‘s blue schlong in Watchmen signified a sea change in U.S. values.

There was also a reported MPAA objection to Cohen being shown “sneaking naked into the tent of an unsuspecting non-actor” on a hunting trip. Piffle.

A scene showing “two naked men attempting oral sex in a hot tub while one of them holds a baby” is, according to a Universal spokesperson, “not on the list that the MPAA finds objectionable.”