I feel horrible about what may happen tomorrow in Indiana and North Carolina. Terrified. It could all finally start to be over (please!) if Barack Obama finishes slightly ahead of the Hildebeest among the Hoosiers and takes her, say, by eight or ten points among the tarheels. But it could go badly too, and the agony could well continue. Just ignore it, I’ve been telling myself today. Or at least don’t fret. At least until tomorrow. 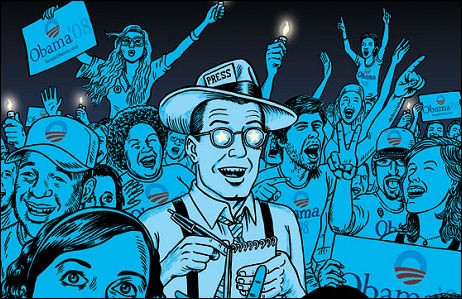 Then I came across this 5.4 Kurt Andersen piece in New York (“About That Crush on Obama”) that perfectly describes everything I’ve been feeling and sensing over the last three or four weeks, and somehow this has brought some comfort. If a modest but decisive Obama triumph is not in the cards for tomorrow, there is at least solace in knowing that the relatively recent news media animus towards Obama, the never-the-twain-shall-meet attitudes that starkly separate Hillary and Barack supporters and the standard loathing I’ve been feeling for the Hillary hinterlanders for months has been well captured and understood.
Please read the whole piece — it hits it dead center — but here’s the best part:
“Yet the flip side of all this is why Clinton’s demographically determined constituencies haven’t felt the Obama magic, why for them he’s an acquired taste, like espresso. It’s not only that the people who create and run the media — and who love Obama — occupy the social and cultural upper rungs. The world depicted in ‘the media,’ broadly construed — not just straight journalism but everything we watch and read and hear — is overwhelmingly a bright, shiny, upscale, youngish world.
“Uneducated white people, residents of the so-called C and D counties, and the elderly — in other words, Hillary Clinton voters — are seldom allowed into the mass-media foreground, and when they appear it’s usually as bathetic figures, victims or losers. (And working-class black pop culture is considered part of the sexy mainstream in a way that working-class white pop culture is not.) The shocking eclipse of Hillary (an eight-figure net worth, maybe, but at least she’s got a normal American name and a Wal-Mart shopper’s bad hair and big bum) by this fashionable (black!) media darling is one more slap in the face for the people chronically excluded from the pretty mediascape version of America, one more damn new thing that they don’t really get. It makes them…bitter, and the bitterness makes them cling to the Clintons.
“The media didn’t see this coming. Back in February, when the new prince was gliding thrillingly up and up toward nomination, a part of the thrill for the media was their happy astonishment that they were no longer cosmopolitan outliers but finally (unlike in 1984 with Gary Hart) in sync with America: Regular folks, white people in Iowa and Virginia and Wisconsin, were actually voting for Obama!
“That was then. With the ten-point loss in Pennsylvania, the latest Reverend Wright eruption, and the shrinkage of Obama’s leads in the polls, the media are feeling lousy, and not just because their guy is taking a beating. If Obama is deemed to be an effete, out-of-touch yuppie, then the effete-yuppie media Establishment that’s embraced him must be equally oblivious and/or indifferent to the sentiments of the common folk.
“Uh-oh. As the cratering of newspaper circulations accelerates (thousands a week are now abandoning the Times) and network-news audiences continue to shrink, for big-time mainstream journalists to seem even more out of touch makes some of them panic. And…so…it’s all…his fault, that highfalutin Obama! Certain journalistic stars these last few weeks (hello, George Stephanopoulos!), instead of copping to the ‘elitist’ sensibilities they obviously share with him (and the Clintons and McCain) — we travel abroad and read books, we have healthy bank accounts and drink wine; so shoot us — reacted by parroting the Clinton campaign’s faux-populist talking points about Obama’s condescension toward the yokel class.
“But pandering to the yokels, pretending to share their tastes and POV? That goes pretty much unchallenged. If the wellborn New England Wasp George W. Bush (Andover ’64, Yale ’68, Harvard ’75) could be successfully refashioned as a down-home rustic, why shouldn’t Hillary Clinton (Wellesley ’69, Yale ’73) be talkin’ guns and drinkin’ Crown Royal shots and droppin’ all the g’s from her gerunds whenever she speaks extemporaneously these days? Naked disingenuousness apparently isn’t as off-putting as, say, failing to pin a tiny metal American flag to one’s lapel.
“For all I know, the Clinton voters find Obama’s spazzy bowling and Jay-Z referencing just as irritating. Like I said, the Democratic race has become for many of us an intense playoff simulacrum, and fans love their team and curse the opponents blindly and faithfully. I can’t quite believe that I have been driven to baseball-geek analogies…but here I find myself nevertheless, feverishly hoping that the story ends not in the fashion of last year’s awful, amazing Mets, but like the Yankees in 2000, when they nearly blew their big lead in the season’s final weeks before straightening up and winning the World Series.”