This teaser for Beverly Hills Chihuahua (Disney, 9.26) obviously promises a spirited family entertainment. Chihuahuas are Mexican dogs, of course, and Mexico, of course, was the seat of ancient Aztec and Mayan culture many centuries ago. But what could this have to do with a present-day story about a rich Beverly Hills chihuahua named Chloe (voiced by Drew Barrymore) getting lost during a Mexican vacation and looking for a way home? Obviously she gradually gets past being a spoiled and arrogant bitch by connecting with her ancestral roots, etc. 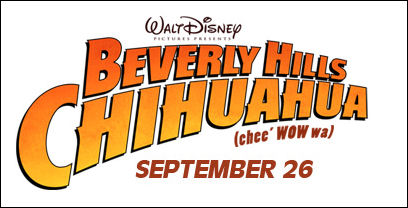 I’m being too literal-minded, I realize, but I really don’t get it. If little chihuahuas can make head-dresses and put them on their heads, that means director Raja Gosnell and the Disney animators have also given them all kinds of human-level abilities and skills. They can weave fabric and lay adobe bricks and throw spears and make swords so they can stage the occasional sacrifice ceremony. (Remember all those bouncing bloody heads in Mel Gibson‘s Apocalypto? And the fact that it was released by Touchstone, a Disney distributor?) Except we all know what chihuahua paws look like so how can they grip anything? See where I’m going with this? If the dogs weren’t shown wearing the Aztec-Mayan head-dresses I could deal with it.
I love that the Disney marketers felt the need to provide a pheonetical pronounciation — “chee-WOW-wa.” They’re clearly wondering if pronouncing “chihuahua” might be over the heads of the people they’re trying to sell tickets to. What does that tell us? The voices of Salma Hayek, Jamie Lee Curtis, Piper Perabo, Edward James Olmos, Andy Garcia and Cheech Marin costar.