The Envelope‘s Pete Hammond reported last night that Sacha Gervasi‘s Anvil!: The Story of Anvil has become the first 2009 film to be mass-mailed to the nearly 6000-person Academy membership. The Anvil! team has been hustling hard since last spring, and this shows they haven’t relented. It also seems that a belief in Anvil! being one of the best docs of the year has gradually sunk in…even if Hammond himself is still skeptical. 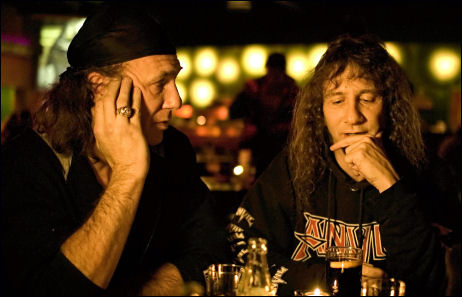 “This little, virtually self-distributed underdog documentary, about a couple of underdog fiftysomething heavy-metal rockers forced to work at menial day jobs while never giving up on their longshot musical dreams, is now a (way) underdog contender for Oscars,” he says.

I was met with some skepticism last April when I asked how can Anvil! “not wind up being nominated for Best Feature Documentary Oscar? It’s got heart. It’s about over-the-hill, down-on-their-luck artists getting their groove back. It’s well made, it’s connecting with audiences, it’s funny, it’s lowbrow-highbrow. How can Academy’s doc committee ignore it?”

Being the first screener sent out “is a nice distinction,” Hammond allows, “and giving voters plenty of time to see it has resulted in good nomination luck for the likes of Little Miss Sunshine, Junebug and last year’s Frozen River, among others.

“But Anvil? When the film debuted at the 2008 Sundance Film Festival, they couldn’t get arrested, so the filmmakers and the band initially released it themselves (with the key help of Richard Abramowitz’s distribution company, Abramorama). Now look at them.”

I kind of thought that The Hurt Locker might be the first screener out of the gate. But you know Summit.

Last Wednesday the heavy-metal group “made their movie debut on the set of fan and director Michel Gondry’s big-budget flick The Green Hornet, filming a cameo where they (literally) explode playing in a rock club,” Hammond reports. “Thursday night they appeared at a screening/q & a at the WGA Theatre in Beverly Hills moderated by Oscar-winning screenwriter Steven Zaillian and ‘hosted’ by such academy members as Gondry, Tilda Swinton and Catherine Keener (who hosted a party for them as well earlier in the week). Now on Friday, their little-movie-that-could should be in most Academy voters’ mailboxes.

“Perhaps the drive to get the film out now to every Oscar voter is partially due to the film’s overwhelming critical support. It currently stands at 98% fresh on Rotten Tomatoes, easily of the highest ratings of the year.”

But the main reason people like the film so much, as I put it last April, is that “everything about Anvil! says that life can be fair, second chances are possible, and while not every loser or also-ranner bounces back, these guys sure did.”