A wise and authoritative pro-Zero Dark Thirty piece has been posted today by Atlantic national correspondent Mark Bowden, who definitely knows his stuff, I’m told. The boiled-down quote to hold on to: ‘Torture may be morally wrong, and it may not be the best way to obtain information from detainees, but it played a role in America’s messy, decade-long pursuit of Osama bin Laden, and Zero Dark Thirty is right to portray that fact.” 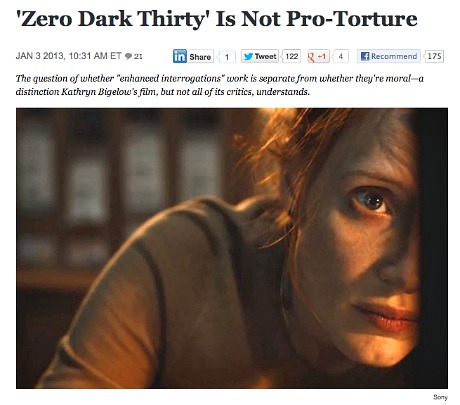 Zero Dark Thirty “is remarkably accurate, and certainly well within what we all understand by the Hollywood label, ‘based on a true story,’ which works as both a boast and a disclaimer,” Bowden writes.

“There apparently was a female CIA field officer who performed heroic service in the 10-year hunt for bin Laden, and whose fixation on ‘Ahmed from Kuwait’ helped steer the effort to success. In the film she is seen butting heads with an intelligence bureaucracy that regards her fixation on Ahmed as wishful thinking. This makes for some dramatic scenes, and gives Jessica Chastain a great many chances to brood with ethereal intensity. The real life ‘Maya’ may have been even more lovely and tenacious, but she was just one of many officers and analysts focused on “Ahmed,” in an agency that never stopped regarding him as an important lead.

“The Saudi attacks in the beginning of the film, identified as the Khobar Towers incident, actually occurred in 1996, six years prior to the action in the film. The raid itself involved four helicopters, two Chinooks and two Black Hawks, not the three Black Hawks shown.” Note: I’m informed by a reliable source that the attack shown in the film is not the 1996 Khobar attack but a 2004 incident. 22 people were shot and killed in the ’04 attack. The CIA actively tried to prevent that attack and failed, as depicted in the film.

“Key planning sessions that happened in the White House Situation Room, chaired by President Obama, are depicted as having happened at Langley with CIA director Leon Panetta. Indeed, those who have accused the current administration of rolling out the red carpet for Bigelow and Boal in the hopes of hyping its role may be surprised to find that the president, whose participation was central throughout, has been almost completed edited out.

“The list could go on, but so could the list of fudged details for any film ‘based on a true story,’ whether it’s the Jerry Bruckheimer/Ridley Scott version of my book Black Hawk Down or Stephen Spielberg‘s Lincoln.

“Everyone understands the rules of this game. Theater is theater, not a scrupulous presentation of fact. We ought to feel betrayed only when filmmakers depart egregiously and deliberately from the record, as Oliver Stone so often has done, substituting what he thinks might be true or perhaps would like to be true for what is known. Reality, after all, is messy and only rarely lines up neatly enough for a two-hour script. Hollywood’s ‘true story’ aims only to color safely inside the lines of history.

“In this broader sense, Zero Dark Thirty is remarkably true. The hunt for bin Laden and other al-Qaeda leaders began with efforts that were clumsy, costly, and cruel. We wrongly invaded Iraq, for instance. We stupidly embraced a regime of torture in our military prisons. Some of the steps we took were tragic and are likely to endure as national embarrassments. But tactics, priorities, personnel, and even administrations changed over those years. The nation learned how to fight this new enemy intelligently.

“Through it all, the search for bin Laden proceeded with bureaucracy’s unique talent for obduracy. This isn’t as sexy or dramatic as watching Jessica Chastain paling before the stink and blood of rough interrogation, a red-tressed Ahab pursuing her white whale through bullets, bombs, and boneheaded bosses…but it stays within the lines.

As for the real story, the question of what role torture played is more difficult. The word ‘torture’ itself is pejorative, in that it equates keeping a prisoner awake with the most sordid practices of The Inquisition. But even mild pressure does tend to lead rapidly to severe mistreatment, as we saw during the Bush administration, which made the mistake of authorizing it, a step that predictably led to tragic and widespread abuses. These have been ably documented by, for one, Alex Gibney (a prominent critic of Zero Dark Thirty) in his stirring documentary Taxi to the Dark Side, and by tenacious journalists like Seymour Hersh and Jane Mayer, not to mention by the candid and devastating snapshots of depraved American military jailors.

“Dick Cheney and others have argued that this coercive regimen produced vital information that prevented terror attacks. So far we have only their word for it, and plenty of other informed voices that contradict it. I do not know the answer, although the reluctance of the current professedly anti-torture administration to explore and punish past abuses may suggest such practices were not altogether useless. The one thing that is certain is that they happened, and on a large scale. The abuses became such a scandal that the Bush administration itself halted the use of coercive methods in 2004. But by then the early interrogations that put ‘Ahmed from Kuwait’ on the CIA’s radar had all happened, and nearly all had involved torture.

“These are facts. Critics of these practices, and of the film, now find themselves in the curious position of arguing that torture played no role in the intelligence-gathering that led to Abbottabad. This is presumably because if the opposite were true, then the hunt’s successful outcome might lead weak minds to conclude that torture has been proved effective.

“Their logic has become, forgive the word, tortured. The key interrogation that focused the CIA’s attention on ‘Ahmed’ concerned Mohammed al-Qhatani. Those who now say that torture played no role in Qhatani’s revelations argue that he offered the information before the rough stuff started. I don’t know if that’s true, but I’ll accept it for argument’s sake. It hardly removes torture from the mix. The essential ingredient in any coercive interrogation is not the actual infliction of pain or discomfort, but fear.

“There can be little doubt that far before Qhatani was actually tortured, he knew damn well that he was in trouble. In Zero Dark Thirty, ‘Ammar,’ who is a fictional amalgam, gives up the name after, not during, his torture sessions. Does this mean that the prior pain and discomfort played no role? In either case, real or fictional, torture creates a context. It creates fear. The only way to know if Qhatani would have been cooperative without being pressured is to have conducted a torture-free interrogation, which did not happen.”