Tweet #1: Matt Reeves‘ excellent Dawn of the Planet of the Apes (7.11), which I saw Tuesday night on the Fox lot, is the Empire Strikes Back of this franchise — a drizzly, darkly lighted dystopian noir that is nonetheless a remarkably subtle and nicely-shaded film about peace and compassion. Tweet #2: It’s basically a thoughtful and humanistic deal that pays off in dramatic terms (or as much as a middle-act trilogy film can do that, given the restrictions), but has a thematic current that laments the war impulse in all beings and species. Tweet #3: Rather than endorse the original Pierre Boulle idea about all men being violence-prone and all apes being basically peaceful (or at least not as bad as humans), Dawn shows that both species have their warmongers and troublemakers, and that the actions of wiser, calmer peacemakers (i.e., leaders more in the Obama than the Dubya mold) are needed to chill things down. Tweet #4: Dawn has some truly beautiful 3D photography with one exquisitely moody composition after another (when it’s not flat-out nocturnal the movie is covered start to finish in misty rainfall and rainforest fog) and a generally lamenting anti-violence attitude. Tweet #5: I was particularly struck by Andy Serkis‘ remarkably subtle performance as the sad and heavily-burdened Ceasar, which is easily an award-quality thing. Cheers also to Jason Clarke for lending real heart and tenderness to a role that might have felt rote or routine with another actor. Tweet #6: Dawn is a much less predictable and more layered film than I expected. 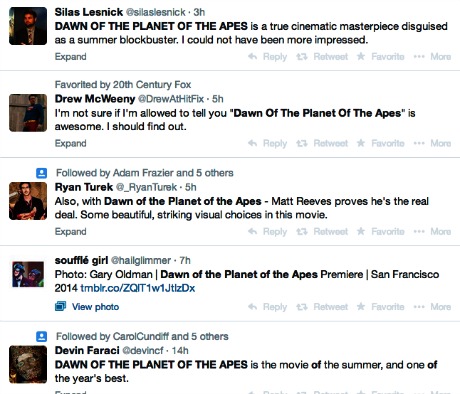 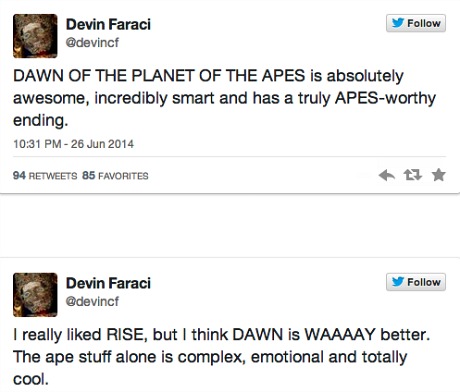