“Atonement”‘s burden has been lifted

“Another theory I’ve been working on is the ‘murder your darlings’ [one] that says that the film everyone thinks is the frontrunner, or the film a publicist or studio tries to position as the frontrunner, is the one that is doomed to lose the big prize,” Awards Daily‘s Sasha Stone wrote earlier today. 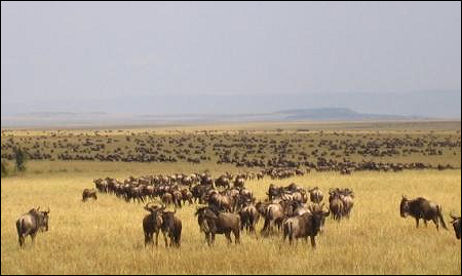 “Murder your darlings — if you want a movie to win best pic, don’t position it as the frontrunner going into Oscar season unless it’s Schindler’s List, Titanic or Return of the King.”

In other words, Atonement — seen in some quarters as a kind of front-runner (i.e., not precisely “the” front-runner but a close approximation) from the end of the Toronto Film Festival until late October — is either slipping or slipped. Which is fine because now it doesn’t have to shoulder any kind of pseudo-front-runner status. Now it can kick back and gallop along with the rest of the panting wildebeests making their way across the plains of Kenya. But watch out for those lions!