A 2 and 1/2 minute trailer for Bryan Singer‘s Valkyrie has been attached to prints of Lions for Lambs that have gone to theatres for debut this Friday. UA spokesperson Dennis Rice says the trailer will have its broadcast debut tomorrow (after being teased tonight) on Access Hollywood and online tomorrow at Yahoo’s trailer site. 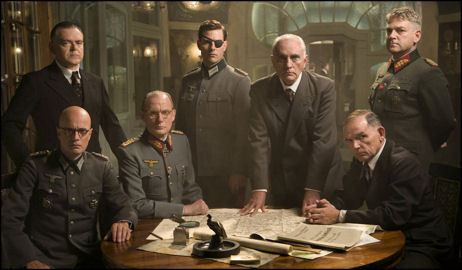 In any event, a U.K. projectionist has watched the trailer for the WWII thriller, which concerns a German military plot to assassinate Adolf Hitler with Tom Cruise playing ringleader Col. Claus von Stauffenberg, and say it’s “fairly gripping.” He adds no one in the cast is speaking with a German accent a la Marlon Brando in The Young Lions. “All of the [mostly British] cast members use their own accents,” he says. “Kenneth Branagh sounds English. And Cruise just sounds American, although maybe he’s softened it a bit to sound more English.”