Avatar In The Running

“As I’ve been suspecting for a while but have now confirmed, we’re looking at an Oscar first,” Variety‘s Todd McCarthy just wrote in a message. “Best Director Battle of the Exes — Cameron vs. Bigelow.” 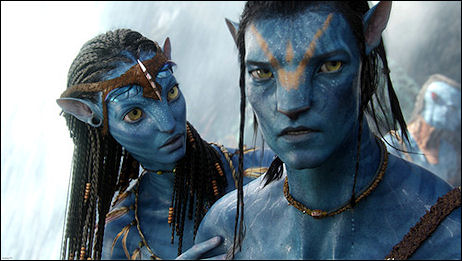 Hilarious! But he’s right, I think. Cameron is now a Best Director contender, along with Avatar for Best Picture and — believe it — Zoe Saldana for Best Actress.

I’ve just forwarded my revised Buzzmeter calls to Gold Derby‘s Tom O’Neil and I inserted Avatar as my third most-likely Best Picture nominee (right behind Up In The Air and The Hurt Locker) and put in Cameron for Best Director and Saldana as Best Actress. Seriously, no foolin’, I mean it.

Yes, Saldana’s manner seems a little broad at first but then you begin to settle into her acting style (the CG morphing demands a certain emphasis — almost akin to silent-movie acting — and de-emphasizing of subtlety) and begin to realize that she’s really good, and that she really brings it home at the end. There’s a blending-of-souls, Na’vi-hugs-human moment at the finale between Saldana and Sam Worthington that you don’t see coming but which feels right and true. It’s the big symmetrical emotional-payoff moment in Avatar that stays with you. (And I don’t care if Armond White agrees or not.)

There’s no question that Avatar deserves a Best Picture nomination. It is exactly the kind of film — magnificently made, audience-friendly, rousing, populist, fun factor — that the Best Picture nominee expansion was intended to accomodate. So now we’re talking two “people” movies that are likely to make the List of Ten — Avatar and The Blind Side.