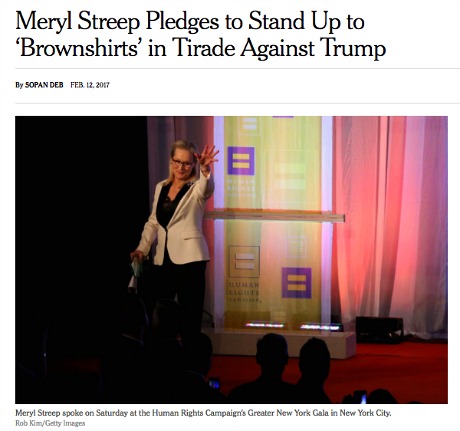 “Ordinarily staid Senate hearings for cabinet choices are now destination TV. As Trump puts forth people who want to plant Acme dynamite in the agencies they will head and as Republicans at the federal and state levels push their conservative agenda, Americans have a refreshed vigor for debating what’s at stake for the environment, education, civil rights and health insurance — and a new taste for passionate, cacophonous town halls.

“Trump has made facts great again. By distorting reality so relentlessly, he has put everyone on alert for alternative facts. As he alarms and exhausts, the Short-Fingered Vulgarian deserves this credit at least: We’re all on our toes now.”

February 12, 2017by Jeffrey Wells15 Comments
« Previous post
They Won’t Forget
Next post »
“It’s Beyond Politics, It’s About Sanity…I’m Not The Crazy One Here”