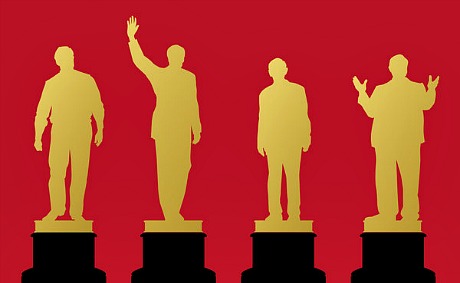 “Perhaps because the 84th Academy Awards fall smack in the middle of an unusually dizzying stretch of the presidential campaign, the parallels between our cinematic and political sweepstakes have come into bold relief. And though Hollywood often sees itself — and is regarded — as a bastion of liberalism, the kinship of the Oscars with the Republican primaries is particularly striking.

“Both pointlessly bloated, the two contests showcase a slew of options without a single one that inspires outsize passion or commands any real consensus. The Republican field also began with a bevy of possibilities. Remember Rick Perry? Herman Cain? Such a sprawling buffet, so many empty calories.

“This year, the movie and political spheres are in peculiarly felicitous alignment. Whether evaluating Oscar contenders or presidential ones, many of us are asking the same plaintive question — is this really the best we have? — and gripped by the same sense that the selection process somehow winnows out or wards off many better alternatives.”