Now that Matt Reeves‘ Dawn of the Planet of the Apes is a sizable hit ($73 million this weekend with a possible domestic cume of $200 million in the near future, not to mention foreign) and beloved by most of the critics and, apparently, most paying moviegoers, is there anyone out there who had a problem or two with it? My only beef was that there was no second- or third-act kicker or deepener. The fatalistic scheme of the story (i.e., the militant warmongers among humans and apes are going to kill any chance of peaceful co-existence) is never challenged — it just plays out. That said, the beat-by-beat delivery is polished and mechanized, and the framings and textures of each and every shot (noirish, drizzly…dryness is anathema) are rapturous, and Andy Serkis‘s melancholy performance as Ceasar is so deft and subtle that…well, I couldn’t submit to any negative impulses. It wasn’t in me, but perhaps others…? Just to kick it around. 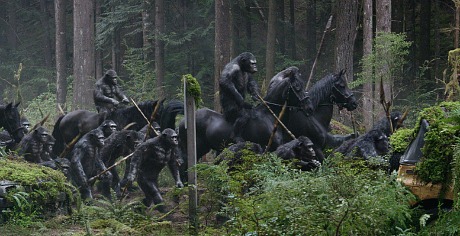 “Surprisingly, we are still in the Bay Area,” writes The New Yorker‘s Anthony Lane. “These apes have a whole world to play with, but they choose to stick to their familiar forest. Pity. I was hoping that Caesar would conquer Gaul or something — you know, hang out with hot French gibbons who would teach him to smoke and go on strike over their retirement plans. Instead, he leads a thoroughly conservative American life. He inhabits a leafy neighborhood, with a loving partner, a son who is gratifyingly weaker than him, and a new baby. His community is close-knit; residents communicate in a blend of gestures, grunts, and very plain English, not unlike the customers in a sports bar. There is even a teacher, Maurice the orangutan, who has learned to write — the words ‘Ape not kill ape’ are scrawled on a rock, proving that Maurice is as pure of heart as he is poor at grammar.

“What the apes lack is a foreign policy, but they are forced to devise one, double-quick, when a human, of all things, strays into their domain. Where did he come from?

“The answer, of course, is San Francisco, where a few hundred men and women, survivors of the disease, are scratching out a meagre living downtown. Compared with the apes, they are woefully short on discipline and self-sufficiency, and you soon begin to ask just what was so damned sapiens about Homo in the first place. That was true of Rise of the Planet of the Apes, too, but the dramatic balance between man and primate was precise, thanks in part to a lovely performance from John Lithgow, as an Alzheimer’s sufferer whom Caesar was anxious to protect. Their scenes together would have made Charles Darwin’s head spin around, and there is nothing to match them here; the human roles are vague and underwritten, with Gary Oldman as a leading belligerent, and Jason Clarke and Keri Russell as Malcolm and Ellie, a pro-ape, anti-conflict couple who look a bit stunned throughout, as if still amazed that years of recycling didn’t manage to save the Earth.

“Clarke was very good as the friendly torturer in Zero Dark Thirty, but here he is simply a foil for his hairy acquaintances — his lowers and betters.”