The only parts of Woody Allen‘s Vicky Cristina Barcelona (Weinstein Co., 8.29) that feel truly alive and crackling are the Spanish-language scenes between Javier Bardem and Penelope Cruz. These two, portraying a pair of tempestuous, self-obsessed painters whose marriage has fallen apart due to an overload of heat and impulse and Spanish vinegar, are dynamite together. They create spark showers when they rage and taunt and rekindle their mutual hunger and disharmony. Cruz, especially, is electricity itself. When she loses her temper, it’s sheer bliss. 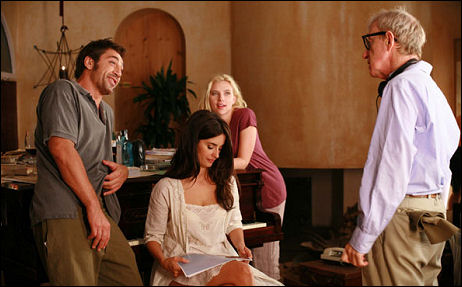 Unfortunately, there are many more scenes of them speaking Allen’s English- language dialogue, and that’s a significant problem. Not only for Bardem and Cruz but for costars Scarlett Johansson, Rebecca Hall (the Christina and Vicky of the title) and secondary players Chris Messina, Patricia Clarkson and Kevin Dunn. I never thought I’d see the day when one of the great comedy writers of the 20th Century would write unintentional howlers, but this happens every so often in VCB, and I was not happy to witness this.
An even bigger problem is a persistent, obnoxious and thoroughly unwanted narration track that makes this story of overlapping, off-and-on love affairs in present-day Barcelona so on-the-nose and over-explained that I was feeling actively hostile less than 15 minutes in. Until Javier and Penelope went into their crazy-love routine, that is, and then everything was well again. In brief spurts.
There were boos in the Salle Debussy as the closing credits began to unspool. I don’t know who was doing the booing, but I know I heard at least five or six guys letting go. 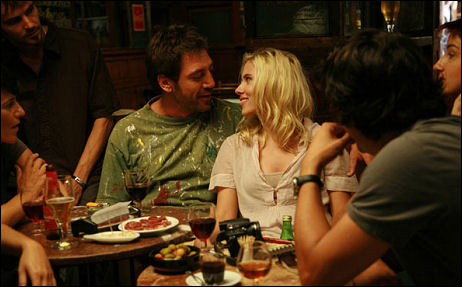 I haven’t the time to write any kind of comprehensive review of this sometimes unintentionally comedic, frequently cliche-ridden parody of a Woody Allen film, but it dawned on me early on that it plays exactly like a Ben Stiller Show parody of a typical Allen effort. Allen has been accused of parodying himself for years, but now he’s really done it. And it pains me to say this. No one filmmaker has given me greater pleasure for a longer period of time than Allen. I worship the guy, but VCB is agony to sit through at times. Some of it is fine or passable. You could call it a light romp and let it go at that. But when it goes off the rails…my God!
If it turns out that Allen was in fact spoofing himself (and thereby having us off) by mocking the kind of anguished, sometimes very funny, sometimes darkly subversive relationship movie he’s been known for since the release of Manhattan nearly 30 years ago, then I will be hugely impressed.
But I seriously doubt if Vicky Cristina Barcelona is a jape. I think he made it with the same earnest spirit and intent that have fueled all his films. This is another story of artist- and intellectual-class characters falling in and out of affairs, sorting things out as they stroll through art galleries and other picturesque points of interest, betraying each other, acting badly (and sometimes hilariously), serving each other great meals and good wine and bringing out the hurt, lust and confusion. 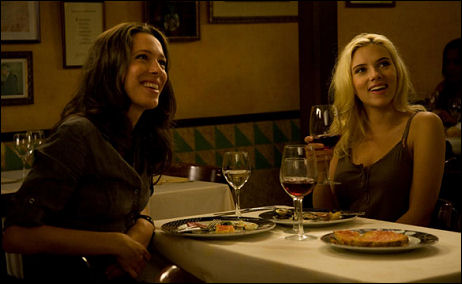 Again, if only Allen had decided to make a Javier-and-Penelope movie in Spanish, and just gotten rid of the whole American-girls-visiting-Barcelona-and-learning- about-the-complexities-of-adult-love angle, he might have had something good and possibly great. A critic friend said on the way out that he believes Bardem and Cruz made up a lot of (if not all of) their inflamed Spanish-language dialogue. It’s a sensible theory. Their back-and-forth is much sharper, explosive and more flowing than the English-language dialogue, so go figure.
During their fighting scenes Bardem repeatedly tells Cruz to speak in English. He does so out of consideration for the English-speaking Johansson, who, having become Bardem’s live-in lover, is a constant witness. By my count he says this line to Cruz at least 9 or 10 times. Why it’s repeated so often is mystifying. Every time he said this, of course, I was saying to myself, “No, no…keep it in Spanish!”
Oh, and the much-touted make-out scene between Johansson and Cruz, shot in a red-tinted dark rooom, is, at best, diverting. It’s just a slow kiss or two and a slight embrace. It certainly doesn’t build into anything. Allen cuts away just as it gets going.
It also seems strange that Allen has imposed a no-naked-breast-shot rule upon Vicky Cristina Barcelona. He’s telling a story that’s swimming in mad erotic currents, and yet he’s clearly decided against boob exposure — not even a casual random glimpse. It’s obviously unnatural and very un-European. Presumably this was about avoiding an R rating, but the oddly prudish vibe works against the story and the general mood, so why even pick up the brush if you’re afraid to paint a nipple?