HE-plus went live today. It will be a free, all-access, wide-open site for about three weeks, or until 10.15. Then the paywall will launch and HE-plus access will be yours for a small monthly fee or a single annual payment of $49. The usual HE output is roughly six stories (or riffs or reviews) per day. From here on I will post three stories on Hollywood Elsewhere and three HE-plus stories, and occasionally a bit more or less.

If you don’t want to buy access to HE:plus, fine. And if you want to pay for it, fine. Either way the daily content will be split half and half between the two sites. There’s no turning back now.

The other contributors I’ve spoken to (including World of Reel‘s Jordan Ruimy) will either step forward and start filing or they won’t. If some don’t feel like going forward, fine. I’ll just scratch them off and no harm done.

Please excuse the changing shape of the front page section — the integrity of the framework isn’t holding firm, and is shifting and squeeze-boxing depending on how small or large you make the browser window. I’ll probably have this fixed in a day or two.

And for whatever reason the front-page openings of each story aren’t displaying the html coding (italics, boldface, underline) that appears when you click through to the whole story.

Every new site has glitches that need refining, but HE-plus is in good enough shape to start rolling now. I’ve only been preparing it for six months. I was initially terrified at the idea of having to fill two columns per day, but if I split this three-and-three (or four and three or whatever) I’ll be okay. 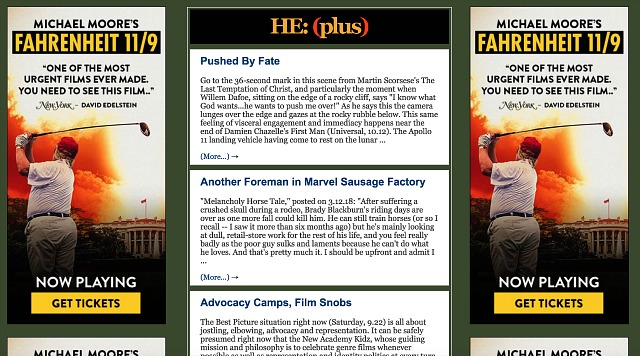