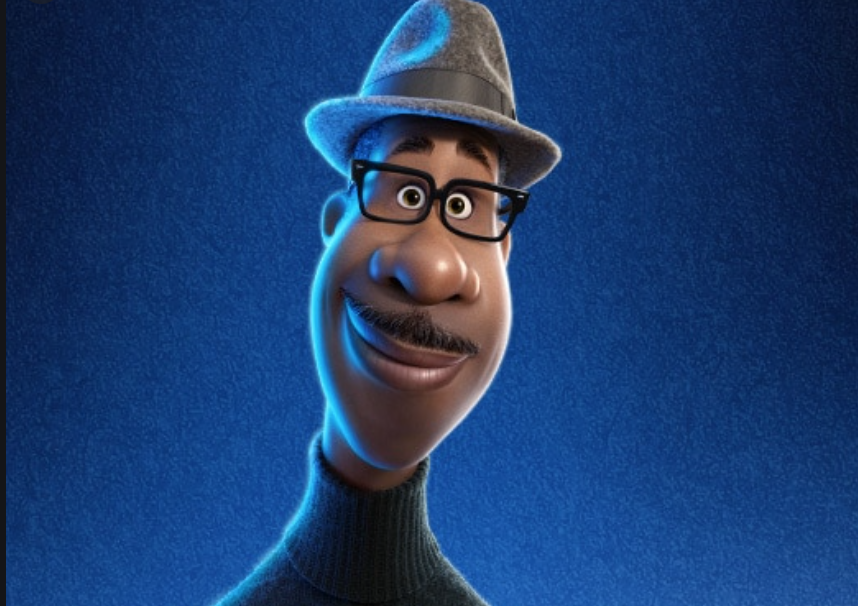 Despite an absolute avalanche of charm and energy and whimsical, wild-ass associations, Soul isn’t good enough. Too fast and busy, too scattered, too all over the place, too hyper. And because it pushes a fundamentally false or at least conflicted concept of life. And because (this is minor but significant) it tries to normalize obesity with the casting of the fattest animated cat you’ve ever seen in your life.

Way too much time is spent in that crazy pre-life preparatory netherworld realm. And I kind of hated that Captain Hook pirate ship cruising along to the sounds of Bob Dylan‘s “Subterranean Homesick Blues”. What the hell does Dylan have to do with any of this?

And our jazz-loving protagonist Joe changes his mind at the last minute so he can save Tina Fey’s “22”? I hated that. A major audience betrayal.

I didn’t hate that he cared for and wanted to save 22, of course, but his whole big dream is to escape the perceived mediocrity of being a middle-school music teacher. We’re encouraged to identify with his quest to become a real musician and to share the joy of being in the groove.

And then, after interminable delays, temporary blockages and goofy complications, he finally gets to play with the hot jazz group. And finally, all is well. Right?

No, it turns out, because Joe changes his mind! He decides to go back to the celestial nether realm to “save” 22 from her hellish deflated existence, and in so doing sacrifices (according to the Great Before rules) his own chance at life.

And THEN the Picasso-like powers-that-be decide to bend the rules because he’s inspired them.

And THEN when he’s back on planet earth Joe is STILL not sure what really matters to him. Will he continue to gig with the jazz group? Or will he embrace his full-tine teaching job? He’s not sure, but one thing he’s ABSOLUTELY sure of is that he’s going to treasure each & every day of his life from then on.

In short, Soul is all over the place. It doesn’t know itself, can’t make up its mind, can’t finally decide what Joe wants. Deciding to save 22 is obviously a selfless and generous act of love, but generally speaking that kind of fundamental either-or choice (fulfill your destiny or make someone else’s life complete) is rarely if ever something that any of us have to face.

Our basic task is to figure out what we really love and then, if we’re lucky or extra-willful, make it happen on our own steam (or not). Many most of us never find inspirational love (a creative calling matched with the talent to bring it off) and just settle into lives of mezzo-mezzo mediocrity.

Yes, the best of those leading semi-mediocre lives discover that feeling and showing real love (caring more for the happiness of a wife or a child than your own) can add a dimensional glow to life. But for those of us lucky enough to find a great creative passion or calling, it’s all-consuming — a demanding but glorious taskmaster.

The great failure of Soul is that it abandons the dream and the reality (struggle, devotion, hard work) and the values of a creatively driven artist who’s been chosen, and casts its lot with the plight of average folks whose greatest potential joy is to discover true love.

Soul finally says that it’s slightly better to make someone else’s life happy than it is to fulfill and energize your own creative spark.

That’s not how life is, or how 99.5% of us live it. Life is a move-it-or-lose-it, swim-or-sink proposition. It’s a fine and noble thing to care more for another person than yourself, but that kind of strict either-or choice is almost never presented to any of us.

What’s that Hud Bannon line? “If you don’t look out for yourself, honcho, the only help you’ll get in life is when they lower the pine box into the grave.” (Or words to that effect.)

Soul, therefore, is basically a fantasy with its fanciful head up Pete Docter’s ass. (And the asses of co-writers Mike Jones and Kemp Powers.) It’s wild and energetic and associative as hell, but the story is precious bullshit, pushing an airy-fairy, dippity-doo view of life.

Sidenote: Why does Tina Fey’s character have the name “22”? My theory is that it comes from Albert Brooks‘ Lost in America. Bunking in a Las Vegas hotel, Brooks’ David Howard is fast asleep as his wife Linda (Julie Hagerty) sneaks away for some roulette. David wakes up, goes downstairs to find her. Linda is losing bigtime, he discovers, because she’s obsessively betting on number 22.

November 29, 2020by Jeffrey Wells25 Comments
« Previous post
“Multiple Globes For Sure!”
Next post »
At Odds With Itself