You can agree with Movieline‘s Christopher Rosen and suggest that Transformers 3 star Shia LaBeouf is shilling insincerely by saying that “the last hour of this movie is the greatest action sequence of Michael Bay’s career, which would put it on the same level as the greatest action ever made. 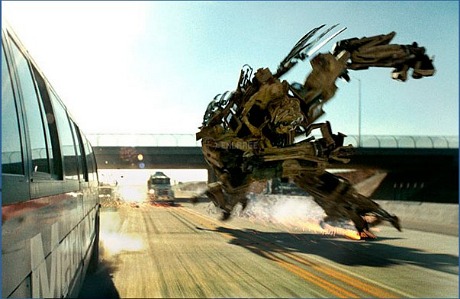 “You don’t breathe for the last hour. There’s just no letup, but it’s also not completely overwhelming and disconnected, as the second movie was. You didn’t know what was fighting what or where you were geography-wise. There was no way to be able to tell a story, whereas this is very Black Hawk Down action. The geography is very clear. There’s only four or five dudes you need to be following. The enemy is very clear. The second movie was so…complicated. The best movies are simple.”

So I asked a friend who’s seen it, and he says LaBeouf isn’t wrong.

The last 40-plus minutes of Transformers 3: Dark of the Moon amount to “the mother of all battle sequences,” he says. “It’s truly a Battle Royale. Nonstop mayhem battle….and your mouth is open that he did this. It’s really noticably epic…a big selling point.

“Except it’s a Transformers movie, you know, and it’s 2 and 1/2 hours or maybe even a bit longer. They had told me it was 2 hours and 20 minutes when I walked in but I don’t know [about that].

“And there was a guy who got up at the beginning of the screening and said they were trying to show a new brighter 3D process…there’s a highlight aspect, a brighter image in mind…the whole goal is to show it brighter so the glasses don’t darken the image. They’re going to show this in theatres that are equipped to do this, this special version. If they want to save 3D at all they need to do this.

A recent Variety story said that Paramount and Bay “have gone beyond simply asking exhibs to turn their lamps up to proper brightness [for Transformers 3]…Par is taking the unprecedented step of releasing a special digital print aimed at delivering almost twice the brightness of standard 3D projection — even more than the dual-projector IMAX Digital theaters.”