Jake Kasdan‘s Bad Teacher (Sony, 6.24) isn’t funny. It’s horrible, in fact. I’m sorry to be judgmental but any film critic who’s given this catastrophe a pass or called it…you know, amusing or enjoyably raucous (and there are plenty who have) really does have to be sent to detention and regarded askance. Some people can’t be trusted with comedies, and anyone who looks at this film and says “yeah, has some funny bits, not bad” has truly questionable values, not just as a cineaste but as a human being. 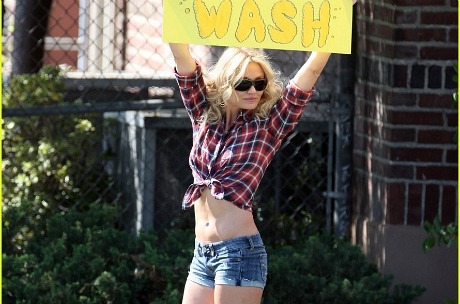 Because the first 44 minutes of this movie really and truly stink. The remainder of it, mind, might be the greatest second half of a motion picture ever made. In fact, let’s give it the benefit of the doubt and say that again, loudly. For all I know the second half of Bad Teacher might be absolutely miraculous. Please see it because of this very realistic potential. For all I know Jake Kasdan, the 37 year-old director, might be an astounding comic wizard and Gene Stupnitsky and Lee Eisenberg might be amazing screenwriters….of films that suddenly become good after the first 44 minutes.

I haven’t seen Friends With Benefits but Justin Timberlake, who plays a hot guy teacher whom Diaz wants to hook up with, has totally blown the good will he acquired by playing Sean Parker in The Social Network. Jason Segel plays a gym teacher who likes to get high….forget it. I don’t want to discuss him any further because all I could think about was how heavy he is and will be down the road.

The fundamental comic idea in Bad Teacher is that everyone on the junior-high teaching staff is either dippy or slow-on-the-pickup or a contemptible idiot or emotionally retarded, and all the students are relatively sensible and adult-minded and matter-of-fact. The other basic idea is that the motivations of the teachers are almost entirely transparent. If they’re thinking fiendish thoughts, they walk around with a ten-foot-square illuminated sign on the top of their heads that says ‘THINKING FIENDISH THOUGHTS.” 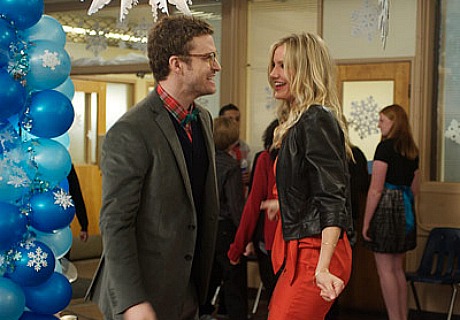 All I know is that during the first 44 minutes I sat there with my mouth open, aghast. I watched and watched and waited and waited. Nothing in this film is funny, I kept muttering to myself. I mean, it has a teacher character named Miss Squirrel (Lucy Punch), and when she’s introducing herself to Diaz she actually pretends to be a little squirrel, holding her paws up and chewing on an acorn and going “chuck, chuck, chuck.” C’mon!

Some comedies just know how to turn the key in the lock and click…it all just kicks into gear. Don’t ask me how to explain it but the first 44 minutes of Bad Teacher are pretty close to sickening. It doesn’t have the first clue about turning a key or even about the existence of keys or locks or tumblers or anything in that realm. It asks you to believe in relentlessly stupid motivations and shovels shite dialogue and idiotic occurences, and I finally just couldn’t take it. Really.

So I bolted, and on my way up the escalator I met a Sony publicist. “Jeff…you’re leaving so soon?” Yes, I’m sorry but it’s just not funny and I can’t take it any more. “Oh…well, I’m sorry.” I’m sorry too, I said, but on the other hand I’m on my way out of the theatre so I’m starting to feel better!

I’m sorry but that’s it for Kasdan. I didn’t like Orange County or Walk Hard all that much, and now he’s in Hollywood Elsewhere movie jail and will stay there until he finagles a “get out of jail card” by making something half-decent. Plus he’s only 5’6″ tall. He’s done. And that’s it for Stupnitsky and Eisenberg too. They’ll probably become huge successes in this town over the coming years and live like sultans and buy expensive motorcycles and have great-looking girlfriends, and they’ll just be living out another chapter of “When Good Things Happen to Bad People.”

I told several people (including publicists and agents) at the Better Life party later that night that I’d just seen Bad Teacher and hated it, and to a man they all said, “Yeah, I heard it doesn’t work” or words to that effect.