Two significant reactions have been posted in response to my 2.15 “Rally Round” piece in which I predicted deferential responses to Martin Scorsese‘s Shutter Island because of a “give Marty a pass as long as the film isn’t too bad” impulse that many older critics seem to hold dear. One is an Auteurs piece by Glenn Kenny called “Carrying Marty’s Water“; the other is a piece by Marshall Fine called “In The Tank for Scorsese?.” 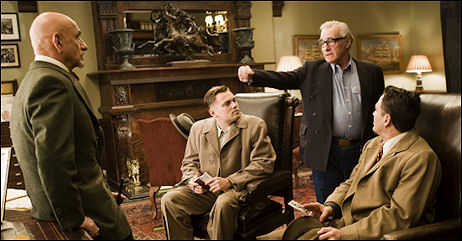 Significant Kenny quote: “If I say that I actively try to find things to like in Scorsese’s films, does that make me a strong Scorsese man, or his patsy, or his water-carrier? I responded very strongly to Shutter Island — but a lot of that had to do with my state of being when I saw the film twenty-two days ago. Is my reaction illegitimate?

“I attended the New York press junket for Shutter Island a couple of weeks ago (the fruits of my labors in this respect are here). Breakfasting with the cream of the television and online video critic crop, I have to say — in all honesty! — that I did detect a note of obligation in their words as I overheard many of them discuss the film. As if they didn’t particularly like it, or ‘get’ it beyond its plot machinations…but that they were going to give it a pass not just because Scorsese’s a revered American filmmaker but because Leo’s a movie star.

“I don’t, however, detect much of the same thing going on in the print reviews.”

I wrote the following to Fine after I read his piece: “I’m not questioning your integrity, Marshall. I’m saying that rooting for an admired director and perhaps bending over backwards to be nice or at least understanding is very human. We all do it. I’ve certainly done this with the Coens (except in the cases of The Ladykillers and The Man Who Wasn’t There). Everyone is prejudiced in one way or another. Nobody is impartial. The best you can hope to be is fair-minded in your dispensations.”

To which he replied: “Thanks, Jeff. I guess what I’m saying is that, while recognizing that no one is impartial, it’s still possible to be honest. Of course, I hope that each Scorsese film (or Coens or Cameron) is great; but I’m also not going to avoid expressing disappointment if it isn’t.

“I don’t take this stuff personally; I don’t take the movies personally either. But I think you do and that’s what makes your work what it is. Indeed, what I find most entertaining and occasionally infuriating about your writing, Jeff, is your absolute sense of being right.

“I have strong opinions and am not afraid to air them, but I guess I stopped worrying/caring about always being right. There is too much evidence in the world at large — and the movies in particular — that suggests that no one cares (and nothing is going to chance because of) what I think. It doesn’t mean I’m going to stop sharing what I think or believing in it, just that I no longer feel that outrage that I used to over what is an immutable fact of life. So who’s the cynic and who’s the idealist?”