There was an LA screening last night of Oliver Stone‘s Wall Street 2: Money Never Sleeps (20th Century Fox, 4.23). A friend of a friend attended. The first blast (i.e., from the guy who talked to the guy) read as follows: “I’ve heard it’s a strong return to form for both Stone and Douglas. It also proves Shia can play with the big boys. A surprisingly satirical movie. It’s the first time I’ve heard a Stone movie described as ‘fun.'” 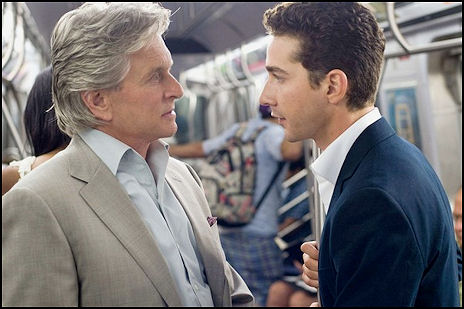 Satirical? Really? I asked for a bit more, and the following came in an hour ago: “It’s an entertaining movie with Shia a better match for Douglas than Sheen, who was a stiff. It’s a sardonic, slightly satirical film with Josh Brolin and particularly Frank Langella scoring well.

“Stone handles the show without either his heavy left hand or his neutered right one that made W not what we’d hoped it. Douglas is the big-ticket item, of course, and revisiting this character is clearly a joy for him as he navigates his way through a world where he’s a player holding a very different hand. Gekko is dealing with stocks while taking his own, and seems like a cobra who’s conflicted about whether to bite…or just charm.

“People will show up for this one, so Fox was right to get it out there quick.”

I then wrote Wall Street 2 producer Ed Pressman, who got back with the following: “Oliver’s first cut is brilliant, witty, complex and emotionally powerful. I couldn’t be happier.”

I was still kind of wondering about the slightly satirical element, so I called someone familiar with Stephen Schiff‘s original script.

“I don’t know whether you ever read Schiff’s script,” he said, “but there are definitely satirical elements in it (the chatter of the hedge-fund guys, the huge Robin Hood Foundation-like charity gala, the Dubai material, the Russian oligarch, the Asian commodities specialist with his Maybach, etc.). Of course, Oliver has always been a fairly earnest filmmaker, but I don’t think satire is particularly rare in his work.

“Natural Born Killers, whether you enjoyed it or not, is certainly satiric in intent from start to finish, and so is W. There is a lot of satiric content as well in Wall Street and Talk Radio and U Turn, and I would argue that there’s some as well in Salvador, Nixon and The Doors.

“Keep in mind, too, that a lot of satire is in the playing. A line or a scene may or may not look satirical on the page, but can be turned in that direction in the performance and even in the cutting.”