Why was I, a non-fan of sadistic kick-ass actioners in the Jason Statham-Steven Seagal mode and a rabid hater of most Asian martial-arts flicks, so delighted with Steven Soderbergh‘s Haywire (Relativity, 1.20.12), and the fight sequences in particular? Answer: because they’re 100% believable, and because Gina Carano, an MMA champ, is the first completely credible female kick-butt star, ever.

Thirty seconds into her first duke-out and there isn’t the slightest doubt that Carano can whip any guy out there, no matter how big or snarly. If she could time-travel back to ’62 she could probably whip Sean Connery. Seriously. And she can act well enough. And she’s attractive.

There’s something almost stunning about the straight-up realism in Haywire‘s fight scenes. Or nostalgic, I should say. For as I mentioned last night, and as Soderbergh himself noted during last night’s post-screening q & a, the fight-scene realism is a kind of tribute to the train-compartment battle between Sean Connery and Robert Shaw in From Russia With Love (’63).

With their phony, fetishy, high-flying action-ballet bullshit, most Asian martial-arts films (efforts like Crouching Tiger, Hidden Dragon excepted) get it so completely wrong, for whatever reason not understanding or unable to deliver Haywire‘s simple aesthetic.

Soderbergh’s shooting and editing of the Haywire fight scenes is exquisite. Haywire is faster and more furious than Drive, but Soderbergh is clearly coming from the same “tone it down, think it through and make it real” school of action cinema. At no time do Haywire‘s action scenes give you that awful feeling of being artificially adrenalized and jacked-up for the sake of coherence-defying Michael Bay-o sensation.

In a late August piece called Chaos Cinema, critic Mathias Stork lamented how modern action films “have become faster, volatile, over-stuffed, hyperactive…bipolar and promiscuous camera movement…a never-ending crescendo with no spacial clarity.” It is soothing to report that Haywire is pretty much the antithesis of this.

If you delight in chaos cinema (probably a fair description of the tastes of most filmgoers out there) then you might feel that Haywire doesn’t quite get it. But if you do feel this way, and if you tell your friends that it’s not as hot-shit as it ought to be, then you need to face the fact that you’re an idiot — that you have the moviegoing mentality (if not the physical proportions) of an Hispanic Party Elephant.

Haywire is a little hard to follow at first, but I presume that screenwriter Lem Dobbs wanted it that way. All I know is that I can’t wait to hear Dobbs and Soderbergh get into another commentary-track dispute (anything will do) when the Haywire Bluray comes out.

Carano’s Mallory Kane is an ex-Marine and independent contractor who’s on the run from several men who have some interest in or relation to an operation in Barcelona involving a Chinese defector or protestor of some kind. Mallory naturally has to elude or otherwise survive all the attacks upon her, or, as Soderbergh put it last night, she “beats her way through the cast.”

The able-bodied fellows who get the piss and the tar whipped out of them include Michael Fassbender, Channing Tatum, Ewan McGregor and Antonio Banderas.

I don’t know that I buy the “Gina Carano is the new Pam Grier” line that some critics and columnists have used. I didn’t really buy Pam Grier as a serious toughie in her day; I believed that she played a serous toughie with great style.

There’s a great car-chase gag that happens at the midway point, involving an unfortunate non-human. That’s all I’m going to say.

I saw Hollywood Reporter columnist Scott Feinberg before last night’s earlier screening of My Week With Marilyn (which I’ll write about tomorrow or the next day, especially focusing on Michelle Williams‘ bulls-eye performance as Marilyn Monroe). I asked if he’d be seeing Haywire at 9:30 pm, and he said, “Well, it’s not an Oscar film and that’s my beat so no, not tonight. I’ll see it eventually but…” What a shame. For serious Oscar-beaters, the simple pleasure of buying a small popcorn and a drink and watching a thrilling, well-made film and going “whoo-whoo!” is on hold until after Oscar telecast, it seems. Well, not this horse.

I get into arguments with Sasha Stone about this. “Just saw a good one, it’s really great and you’ve gotta see it,” I’ll say to her. And she’ll say, “Yeah, okay, someday…but it doesn’t have much of a shot at getting nominated in any of the major categories and we’re right in the middle of Oscar season and this is what I do for a living so…” God! 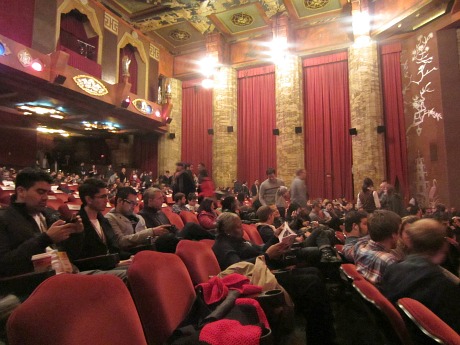