I can’t do a Ten Best of ’05 of list — the number has to be fourteen. And I had to include 28 films on the “Pretty Damn Good” roster, and I had to make a special mention of Terrence Malick’s stunningly see-worthy shortfaller, The New World.
That’s a total of 43 very good-to-sublime films released this year, or a little less than one every nine days. Not a bad tally, and arguably one of the more distin- guished in recent years, and with the makings of a rip-snortin’ Oscar fight in January and February. 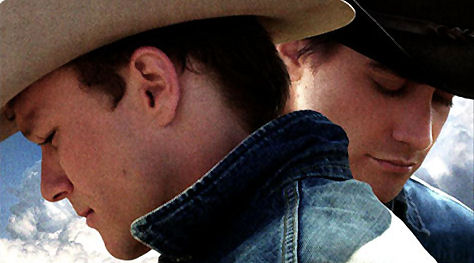 Just do the fast-rewind for a second…the finely-tuned austerity of A History of Violence and Match Point, the note-perfect Capote, the spookiness of Cache, the sad and tremulous Brokeback Mountain, the familial warmth of films like Hustle & Flow, In Her Shoes and The Family Stone, the Van Santian purity of Last Days, the bleached-bleary paranoia of Syriana, the Lawrence of Arabia-like sweep of Bob Dylan: No Direction Home…and that’s just scratching it.
I’ve kept the docs separate except for Werner Herzog’s Grizzly Man, which gets spookier and spookier the more I watch it and fully deserves its own space, and Martin Scorsese’s masterful Bob Dylan: No Direction Home. Some films (like Cameron Crowe’s Elizabethtown ) were special cases and required a stand-alone mention. And of course, nearly all the super-stinkos were expensive big- studio releases.
< ?php include ('/home/hollyw9/public_html/wired'); ?>
I’ve only listed 102 films so I’ve obviously left a lot out. There are plenty I still haven’t seen. And some just don’t matter. I couldn’t think of a single thing to say, good or bad, about Thomas Vinterberg’s Dear Wendy or John Stockwell’s Into the Blue, for example.
The listings in each category are in order of personal preference. Suggestions about films I’ve omitted and should have added to this or that category are welcome. I’m sure there are several.
Creme de la Creme: Brokeback Mountain, Capote, The Constant Gardener, A History of Violence, Hustle & Flow, In Her Shoes, Match Point, The Family Stone, Crash, Cinderella Man, The Beautiful Country, Last Days, Grizzly Man, The Three Burials of Melquiades Estrada (14).

70% Masterful…Merging of Lovers From Different Cultures in the Midst of a Splendorous Natural Symphony…But Goes off The Rails, Drop-Kicks the Mood and Leaves You Stranded at the 110-Minute Mark : The New World (1)
Pretty Damn Good: Good Night and Good Luck, The Wedding Crashers, Syriana, The Aristocrats, Batman Begins, Broken Flowers, Bob Dylan: No Direction Home, Cache (Hidden), The Interpreter (for the bomb-on-the-bus scene alone), King Kong (if you can excuse the first 70 minutes), Nine Lives (for Robin Wright Penn alone), Cronicas, The Beat That My Heart Skipped, The Squid and the Whale (Noah Baumbach has an assured place at the table), The Upside of Anger (for Kevin Costner’s performance) , The Thing About My Folks (for Peter Falk’s performance), Mrs. Henderson Presents, Kung Fu Hustle, Kingdom of Heaven, Rent, Broken Flowers, Brothers (for Connie Nielsen’s performance and the austere and upfront tone of Suzanne Bier’s direction), The Chronicles of Narnia: The Lion, The Witch and The Wardrobe, War of the Worlds, Casanova, My Date With Drew (a good-humored rendering of a metaphor about youthful pluck and persistence and team spirit), My Summer of Love, Paradise Now. (26)
Not Half Bad: The Producers, The Dying Gaul, The World’s Fastest Indian, Four Brothers, Layer Cake, The Great Raid, Reel Paradise, Green Street Hooligans, Everything is Illuminated, Proof, Dreamer: Inspired by a True Story, Tim Burton’s Corpse Bride, Dominion: Prequel to The Exorcist (13) 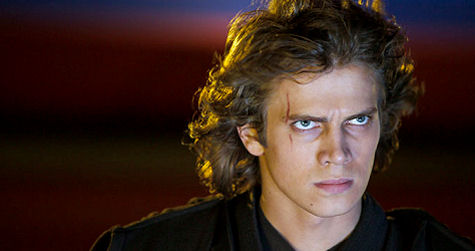 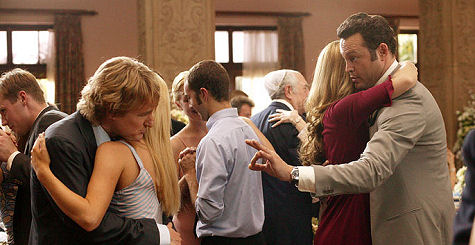 Final Enduring Proof of George Lucas’s Mediocre Soul : Star Wars: Episode III — Revenge of the Sith (1)
Best Docs (after Grizzly Man and Bob Dylan: No Directon Home): Why We Fight, Gunner Palace, Mondovino, Favela Rising, Enron: The Smartest Guys in the Room, Mad Hot Ballroom, Tell Them Who You Are, One Bright Shining Moment: The Forgotten Summer of George McGovern (for the tribute factor alone…McGovern is such a respectable man), Rize, The Last Mogul, Murderball, Occupation: Dreamland (12)
Never Saw’ Em: Ballet Russes (apologies to the hard-working Mickey Cottrell and the all-around good guy producer Jonathan Dana, who repped it), The Ice Harvest, Oliver Twist, Little Manhattan, Transamerica, The Prizewinner of Defiance, Ohio, Forty Shades of Blue, Get Rich or Die Tryin’, You and Me and Everyone We Know (9)
Favorite DVDs of the Year: Two Criterion special editions — Michelangelo Antonioni’s L’eclisse and Robert Bresson’s Au Hasard Balthazar.
Worst DVD of the Year: Fox Home Video’s two-disc Oklahoma! because of the appallingly bad mastering of the Todd AO verison of the film, which looks worse than any version of this film ever put out, including the VHS versions in the ’80s. I said before that the executive who approved this should be fired. I was wrong to say this. He should be hung by his thumbs. 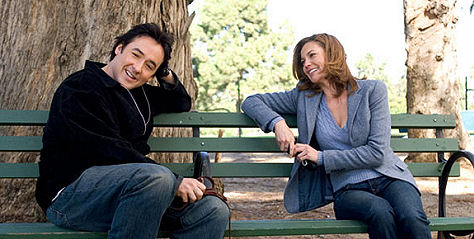 Once again reactions to Werner Herzog’s Grizzly Man have people shaking their heads and asking “what the hell?” And once again there’s reason to ask why the members of the Motion Picture Academy’s Documentary Executive Committee continue to hold to a tendency to make total boob-level decisions.
Knowledgable people everywhere were appalled when Herzog’s brilliant examina- tion of the life of Timothy Treadwell, a self-promoting grizzly bear obsessive who wound up getting eaten by one, didn’t make the committee’s short list of doc fin- alists, which was announced on 11.15.05.

And now the committee’s oversight is being examined once again in the wake of Grizzly Man having been named the year’s best feature-length documentary by four respected critics groups — the New York Film Critics Circle, the Los Angel- es Film Critics, the New York Online Film Critics and the San Francisco Film Critics — over the last four days.
The doc committee, chaired this year by Freda Mock, of course isn’t obliged to agree with film critics groups in its choice of the year’s finest. But with four different groups of obviously passionate film lovers picking Grizzly Man, wouldn’t you think the AMPAS committee would have at least included it on the preliminary list of finalists?
Obviously there’s a major disconnect going on here.
I called around about this and all I hear are the usual throwaway comments. A publicist who asked for anonymity said the documentary committee is “a curious bunch.” A nameless documentary filmmaker I spoke to said, “You never know about these people.”
It’s been suggested here and there that Grizzly Man didn’t rate in the committee’s eyes because it’s composed of mostly found video footage — i.e., Treadwell’s — or because Herzog edited the film for a relatively short period of time. Whatever.
I called an Academy spokesperson this afternoon for some sort of explanation or comment about this disparity of opinion. She declined.
Lion’s Gate Home Entertainment will be releasing a DVD of Grizzly Man on DVD on Tuesday, 12.26.

I’m not sure if people are getting how reborn Kevin Costner is these days. I don’t know him and I’m not claiming any special insight, but over the last two or three years Costner seems to have remade himself into this quietly self-amused older guy who just ambles along and instinctually gets everything and could almost be Bruno Ganz in Wings of Desire.
People who try really hard to please are exhausting. (Case in point: Sarah Jessica Parker’s bitch from Bedford in The Family Stone.) Costner is pleasing these days because he doesn’t seem to trying at all, and because not trying is a very clever play. 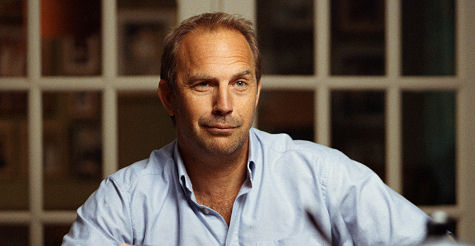 Kevin Costner in The Upside of Anger

I’m not talking about Open Range (2003), which was his first big career-turnaround film. I’m talking about how Costner seemed to become this other guy when he put on the jacket of a supporting actor in Mike Binder’s The Upside of Anger, and the way he’s done it again in Rob Reiner’s Rumor Has It (Warner Bros., 12.25).
Rumor is what it is, but at least Costner makes his scenes play pretty well on their own. The ability to make tepid dialogue sound fairly good is something to respect, I think. This is partly due to the fact that there’s no middle-aged actor around these days who seems quite as settled into himself.
I remember reading in some weekly mag puff piece about 15 years ago that Cost- ner doesn’t work out, and thinking this was kind of a funny attitude. Now I get it. Costner is Mr. Anglo-Dangle Bojangles…the laid-back guy in loose shoes who can charm without trying but just as easily let the whole thing go if the vibe’s not right.
There’s just something zen about him now, and he couldn’t have gotten to this place if he hadn’t been Mr. Big Swinging Dick with his Oscar and the failures of Waterworld, Wyatt Earp and The Postman. He had to go down and come back from that.
In a semi-fair world, Costner would be getting talked up as a Best Supporting Actor for his Anger schmanger…like he is right here and now.