Early last evening I spoke with Bethlehem director Yuval Adler and Ali Waked, the Palestinian journalist with whom Adler co-wrote the screenplay. I wrote a few days ago that Bethlehem, Israel’s official entry for the Best Foreign Language Film Oscar, is “a lucid, tightly wound thriller that regards the Israeli-Palestinian conflict through a filter of double-agenting and family matters and betrayal and anxiety,” and that the Academy’s foreign language committee “would be foolish not to pay heed.” 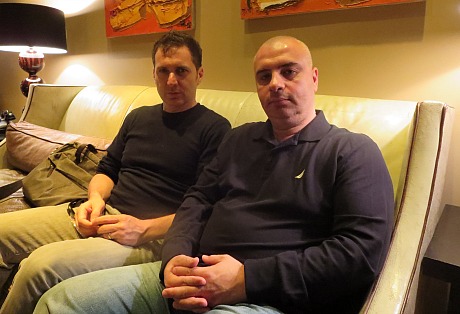 Adler and Waked are in Los Angeles for screenings of Bethlehem at AFI Fest. We kicked it around for 40 minutes in the lower lobby of the Roosevelt hotel. This was just before the David O. Russell event upstairs.

Unfortunately, puerile music is always playing in every room of the Hollywood Roosevelt so it’s hard to hear what we’re saying. The mp3 is not inaudible but it’s a pain with the music mixed in. If I ask a waiter to please ask management to turn the music down and it stays loud, the waiter gets stiffed. Sorry but that’s the rule in Hollywood Elsewhere Land. Not that it happened this time. I didn’t order anything. But if I had…

Here’s an 11.10 Times of Israel piece called “The Novices Who Could Take Bethlehem To The Oscars.”

Bethlehem is “a two-character drama about deceivers on opposite sides,” I wrote the other day. “At the same time it’s a curiously touching father-son relationship story.

“17-year-old Sanfur (Shadi Mar’I) is the pissed-off younger brother of Ibrahim (Hisham Suliman), a hardcore Palestinian militia leader whom the Israelis want to assassinate. We learn early on just how pissed-off Sanfur is. For the last couple of years he’s been slipping dribs and drabs of information to Israeli Shin Bet officer Razi (Tsahi Halevy), who is hungry, of course, for info about Ibrahim.

“Why is Sanfur betraying his brother, family and community by talking to the enemy, to an Israeli agent who would like nothing more than to eliminate Ibrahim and his comrades? Sanfur was first approached by Razi at age 15, when he was more or less soft clay. Razi is more of a comforter than an interrogator. When we meet Sanfur’s actual father (Tarek Copti) it’s clear that Ibrahim is regarded as the star of the family and that Sanfur is seen as the runt of the litter, a volatile kid whom nobody respects.

“The decisive dramatic moment happens when the Shin Bet team manages to finally hit Ibrahim. Guilt kicks in, suspicions surface, tensions heat up, something has to give. The big climax is quite a moment. You can tell going in that this story won’t end “well,” and it doesn’t. But the unfolding is tense and edgy in a low-key sort of way, and highly believable start to finish.”