Everyone knows how Scott Feinberg‘s award-season forecasts break down. The ten films included in his Frontrunners tally are well-situated to the extent that most (i.e., Scott always includes a couple of stragglers) are likely to be Best Picture-nominated.

It’s axiomatic in this highly political year, especially in the wake of last summer’s George Floyd protests, that any well-reviewed, professionally assembled film featuring a primarily POC cast will be Best Picture nominated, and so Feinberg, being no fool, has included Netflix’s Ma Rainey’s Black Bottom, Amazon’s One Night in Miami and Pixar’s Soul in his Frontrunners roster.

None of these three films even approaches the quality of Steve McQueen‘s Mangrove, Lovers Rock and Red White & Blue, but McQueen’s “Small Axe” quintet is Emmy material and so we’re left with what we’re left with. No disrespect intended, but two of these features are basically filmed plays, and Soul is emotionally indecisive and all over the map and fairly infuriating for that. 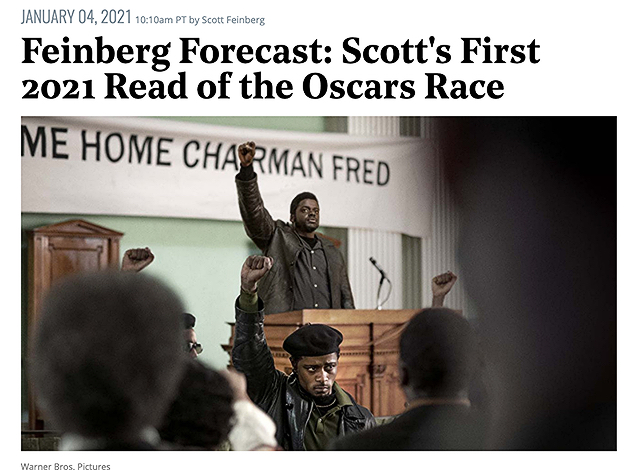 The question for Oscar-race handicappers is “why does Feinberg have it in for Spike Lee‘s Da 5 Bloods“? I don’t mean to imply that Feinberg has a hardnosed problem with Lee’s film but there must be some reason why he’s included it in the much-dreaded “Major Threats” category.

If Feinberg has categorized your awards-hopeful film as a “major threat,” you’re…well, I’d better be careful here. I was going to say “you’re as good as dead” but what I really mean is that “major threat” means “uh-oh.” Over the last several weeks Da 5 Bloods has been on just about every Best Picture top-ten contender list. Right now it’s occupying the #9 slot on the Gold Derby expert list.

Feinberg is just one guy, of course, and voters will vote how they want to vote, etc. Especially the crowd that voted last year for Parasite…people that live on their own planet.

Here are the films included in Feinberg’s top four categories. Hollywood Elsewhere has boldfaced those titles that really and truly have the Best Picture juice …films that deserve to be Best Picture nominated in the eyes of the Movie Godz. Before starting I’m going to say for seventh or eight time over the last three or four weeks that while Steve McQueen’s Mangrove and Roman Polanski‘s J’Accuse won’t be under consideration for reasons that have nothing to do with quality, they would DEFINITELY be Best Picture hotties in a fair and just universe.