Big Eyes, announced last night by Variety‘s Michael Fleming as the forthcoming “directing debut” of renowned screenwriters Scott Alexander and Larry Karaszewski, will be in fact their second stab at feature directing. Their first was a commercial wipeout called Screwed (’00), which was a pretty good piece on paper (i.e., an inventively plotted and certainly unpredictable script) and didn’t deserve the curses that fell upon it. 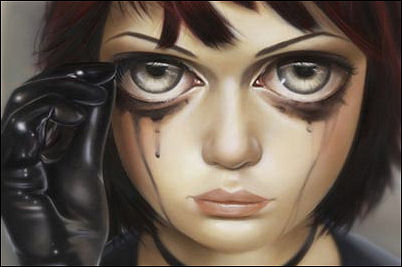 I haven’t read Big Eyes, a biopic of famed painter Margaret Keane (to be played by Kate Hudson) “whose distinctive creations featuring big-eyed children became one of art’s first mass-market success stories in the 1950s.” But given the withering contempt for Keane’s paintings in the art world and their general reputation as a mass-market joke (i.e., right next to those black velvet paintings that were so richly lampooned in the original 1979 version of The In-Laws), how can Big Eyes be anything but a portrait of a laughably mediocre artist a la Ed Wood?
Fleming’s story, written without the slightest indication that he’s in on the joke, says that Alexander and Karaszewski’s drama “covers Keane’s personal awakening at the onset of the feminist movement, leading to a lawsuit she filed against her husband, Walter, who claimed credit for her works.”