Maharishi Mahesh Yogi, who was briefly the Beatles’ spiritual guru in late ’67 and early ’68 until the bloom fell off with allegations of sexual impropriety, died in Holland yesterday. He was nonetheless a seminal figure in the Eastern-following spiritual movement of the late ’60s — psychedelic Godhead breakthroughs leading to dog-eared copies of the “Baghavad Gita” in college dorms leading, three or four years later, to the “Me Generation” personal fulfillment movement of the ’70s. 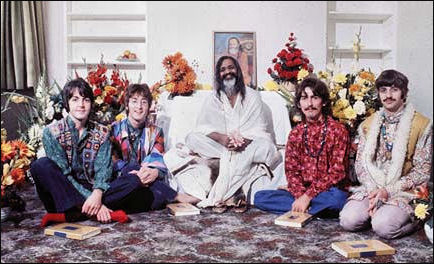 Say what you will about bedroom shenanigans but MMY spoke of immaculate and eternal truths, and at a crucial moment in history he prompted tens of thousands to turn a significant spiritual page.
Many sensed there was something less than magical (I almost wrote “vaguely deceptive”) about the assertions that transcendental meditation, if practiced devoutly, would drastically improve followers’ lives, but the outgrowth of all that energy and fascination was that hundreds of thousands of American-born spiritual seekers began to know what “satori” is and grasp the intimations of revelation in…well, loads of stuff but I’m thinking right now of the lyrics in “The Wind Cries Mary,” the Jimi Hendrix song. (“Jets” in their boxes, “clowns” gone to bed…seriously.)
My key Maharishi memory will always be John Lennon‘s Rolling Stone recollection about how the Beatles quit the ashram “after he confronted the guru about sex allegations. He said: ‘There was a hullabaloo about him trying to rape Mia Farrow and a few other women, and things like that.
‘The whole gang charged down to his hut. I was the spokesman, as usual, and said: ‘We’re leaving!’ He asked why and I said, ‘Well, if you’re so cosmic, you’ll know why.’ He and his right-hand men were always intimating that he did miracles.The Maharishi gave me a look that said, ‘I’ll kill you, you bastard!'”