I attended a one-hour “Tribute to French Cinema” last night at the Palais de Congres. I was expecting to see a Chuck Workman-like tribute projected on the big screen, but it was mainly about cheers and glitter. Several French actors and filmmakers (Costa Gavras, Catherine Deneuve, Charlotte Rampling, Nicole Garcia, Marion Cotillard, Guillaume Canet, et. al.) came on stage and took bows. 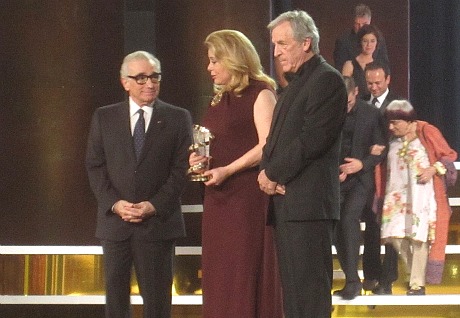 Martin Scorsese, the nominal headliner, was the first to be introduced. He delivered some genteel boilerplate remarks about the history and importance of French cinema, and spoke about how he’s always considered Marrakech to be “a kind of home.” (He shot The Last Temptation of Christ here 23 years ago.) The folks in the audience seemed to enjoy it. I was enjoying a crane camera that slowly swooped right over peoples’ heads. Less than two feet away, I mean.

I took some video of the big finale. It took 90 minutes to load 60% of it this morning, and then the connection dropped and the upload was aborted. Naturally.