“I am convinced that the storyline of this year’s Oscars is that a woman will win a Best Director Oscar for the first time,” says director Rod Lurie (Straw Dogs, Nothing But The Truth), “and for a war film!” He’s speaking, of course, of Hurt Locker director Kathryn Bigelow, who’s been steadily gathering award-season esteem and is now only a few steps away from making history. 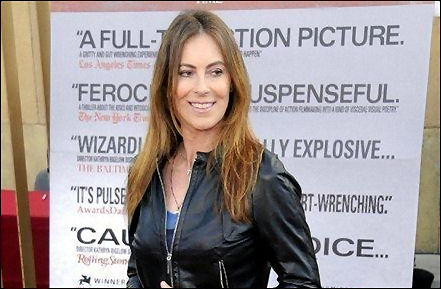 Only three female directors have ever been nominated for a Best Director Oscar — Lina Wertmuller for Seven Beauties (’76), Jane Campion for The Piano (’93) and Sofia Coppola for Lost in Translation (’03) — and of course none of them won.

“Bigelow has long been one of the unsung auteurs in the business,” Lurie writes. “She is among that elite group of filmmakers who (this is true for me, at least) will get me into a theater based on their name.”

The irony to which Lurie alludes is a powerful one. Wertmuller’s film aside, the two other nominated films listed above were about female characters, which faintly enforces the notion (or prejudice, if you will) that female directors are for the most part inclined to want to make films about women-friendly subject matter with strong female characters in the lead.

And yet if Bigelow wins (and I strongly suspect that she will) it will be for making a kind of movie — war-torn, violent, foreign territory, all-male cast — that’s been the exclusive province of male directors since the dawn of the film industry.

There’s almost a kind of Barack Obama analogy in Bigelow’s situation. Just as the first African American was elected president in part because he wasn’t seen by hinterland yahoos as being especially “black” (with his white mom and white grandparents), Bigelow seems on the precipice of an historic win in part because she didn’t direct a “woman’s film” and in fact dove right into guy territory. And perhaps also because she’s always been an X-factor female director to start with, being strictly from action and sci-fi and nuclear submarines and motorcycles and leather jackets and that line of country.

“Having been in the military myself, I can tell you that I found it astonishing that Bigelow captured something so well — a way of life, an attitude — that she’s been prohibited from experiencing for herself,” Lurie concludes. “I know that directors often make films in worlds they themselves have never entered, but the fact that Kathryn has not only made a war film but one of the best war films in, Jesus, I don’t know how long, is a testament to both her talent and her diligence.”