The Slumdog Millionaire tykes Azharuddin Mohammed Ismail and Rubiana Ali Qureshi, whose real-life living conditions in Mumbai were described in suspiciously-timed stories that some regarded as anti-Slumdog smears, have been promised new homes. The abodes will be an upgrade over the small huts the kids have been living in with their families. But it isn’t clear who will actually provide the new digs — local Mumbai politicans or Slumdog Millionaire‘s director Danny Boyle, producer Christian Colson and Fox Searchlight, the film’s distributor. 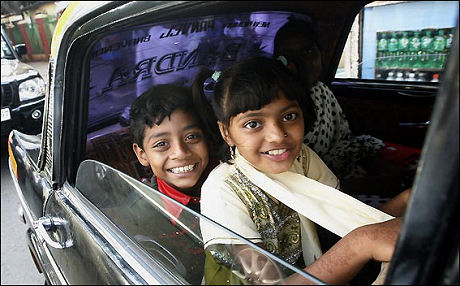 Times Online reporter Rhys Blakely reported today that the “children’s families will be given proper homes under an arrangement that allows local politicians to allocate a small number of flats on a discretionary basis.” He also quoted Amarjeet Singh Manhas, the chairman of the Maharashtra Housing and Area Development Authority, as saying that the kids “deserve to be rewarded for the film’s success at the Oscars…the chief minister [of the state] has approved this…their families will receive notification in a couple of days.”

Daily Mail reporters Liz Thomas and Barney Henderson have also reported today that Boyle and Colson have told them that the kids and their famililes “will be moved to apartments worth ¬£20,000 each in the coming months.”