Four major awards-giving groups have recently announced their top pics, and so far the leading hottie is Luca Guadagnino‘s Call Me By Your Name. That is, if you go by the top prize given by Gotham Awards plus the six Spirit Award nominations earned by the CMBYN team. No guarantees, but with six nominations the odds favor Guadagnino taking the Spirits’ Best Feature trophy.

On the other hand the New York Film Critics Circle have just chosen Lady Bird as 2017’s Best Film, but the winners of that award and the Best Picture Oscar champs have only occasionally overlapped. Two days ago the more mainstream-minded National Board of Review gave their top award to Steven Spielberg‘s The Post. This may or may not indicate the voting preferences of Academy and guild members next month, although it probably will. 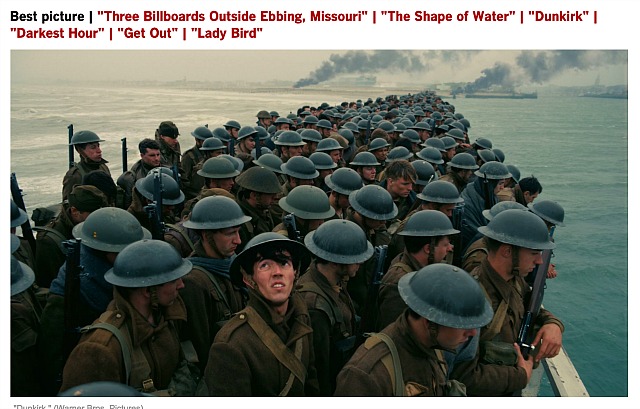 There’s no disputing, however, that over the last few years the winners of the Spirit and Gotham awards have mostly gone on to win the Best Picture Oscar. In five of the past six years, in fact, winners of the Spirit Best Feature prize have gone on to win five Best Picture Oscars — 2011’s The Artist, 2013’s 12 Years a Slave, 2014’s Birdman, 2015’s Spotlight and 2016’s Moonlight.

It would seem at this stage that any half-attuned Oscar prognosticator would identify Call Me By Your Name as a leading Best Picture contender. And yet when six Oscar experts were recently polled by the L.A. Times (“From Dunkirk to Coco: The 2018 Oscars Buzzmeter”), their six biggest favorites didn’t include the Guadagnino.

Instead they chose Lady Bird (smart call), Darkest Hour (which hasn’t a snowball’s chance in hell of winning Best Picture — Best Actor shoo-in Gary Oldman is Focus Features’ only competitive pony), Three Billboards outside Ebbing, Missouri (a respected film that was shut out in the Spirit Award noms and by the Gothams), Dunkirk (total shut-out among NYFCC and NBR voters), Get Out (Spirit nominee, Gotham winner + Best First Film award from NYFCC) and The Shape of Water (shunned by Spirits, blanked by NBR and NYFCC).

Most of these six films could theoretically win the 2017 Best Picture Oscar, but what could Gold Derby‘s Tom O’Neil, Vanity Fair‘s Nicole Sperling, Indiewire‘s Anne Thompson, The Envelope‘s Glenn Whipp and L.A. Times critics Justin Chang and Kenneth Turan have been thinking to have not selected Guadagnino’s film as at least a hot contender? How could they possibly size up the field and go “naaah, don’t think so” when it came to the one film in the 2017 Best Picture constellation that many have called a masterpiece and a classic slow-burn love story?

In fact Chang, Turan, Whipp, Sperling and O’Neil picked Call Me By Your Name as a leading Best Picture contender, but the other six films ranked higher.

If you go strictly by Metacritic and Rotten Tomato ratings, Call Me By Your Name is the second highest with a 95% and 98% rating, respectively for an average of 96.5%. How could that esteem possibly translate into six other films being ranked as hotter contenders?