It doesn’t matter to me if Garth Davis‘s Mary Magdelene, which is slated to open domestically on 3.30.18, goes out as a Weinstein Co. or Focus Features release. The movie’s the thang, not the distributor. (There’s no Weinstein Co. logo at the end of this trailer, but a Focus Features logo does appear.) Davis’s film is presumably a feminist slant on the New Testament legend, written by Helen Edmundson and Philippa Goslett, with Rooney Mara playing the reformed harlot Mary Magdalene.

It’s also a slightly revisionist take with Jesus Christ, who died at age 33, being portrayed by a 43 year-old Joaquin Phoenix, who actually looks like he’s 54.

It’s fascinating to contemplate a scene in which Jesus and Mary Magdelene (Rooney Mara) are chatting on a hilly Italian coastline (pic was shot in Matera, the Puglia region, Napoli and Sicily) and looking out at the Mediterranean. On top of which you can’t hear the dialogue. I defy HE readers to tell me what Mara and Pheonix are saying to each other starting at the 56-second mark. Mara: “Pisahtla minnup-minnupah kaht?” Phoenix (at 1:00 minute mark): “Nuhnwah sinkdat bad pitnyah puhtohit.”

Costarring Chiwetel Ejiofor as Apostle Peter and Tahar Rahim as Judas Iscariot. Pic will probably be released on 3.30.18. 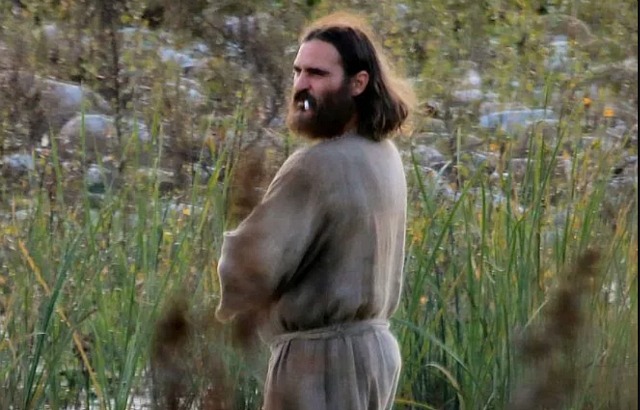 November 30, 2017by Jeffrey Wells14 Comments
« Previous post
Strange Avoidance Mechanism
Next post »
End of Civilization As We Once Knew It