In re-reading Guardian critic Peter Bradshaw‘s comments about Control that ran last May, I was reminded that a lot of the enjoyment I took from Anton Corbijn‘s film was due to the soothing visual bathwater effect of watching any film shot in black-and-white widescreen (2.35 to 1), which is perhaps my favorite mode of all. 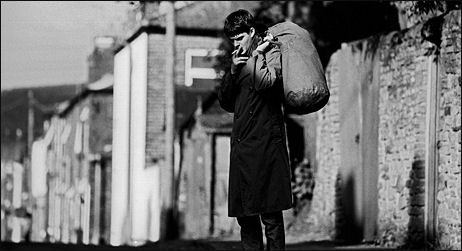 “Corbijn’s movie is shot in a stunning high-contrast monochrome,” Bradshaw wrote, “perversely turning…grimness into grandeur. It effortlessly revives a British cinematic style that you might call beautiful realism, reaching back to Christopher Petit‘s Radio On, and further back to Tony Richardson’s The Loneliness of the Long Distance Runner and A Taste of Honey.
Corbijn developed his love of black-and-white from his photography and music-video background, but credit should also go to Control‘s cinematographer Denis Lenoir (The Clearing, Demonlover).
To me, any film shot in monochrome “scope” — a format that has all but disappeared — is reason enough to pop for a ticket or a rental. I’ll sometimes rent DVDs of somewhat mediocre films (i.e., The Longest Day) if they’ve been shot this way. I’m even tempted to watch the newly remastered version of Jailhouse Rock (an otherwise so-so, in-and-out Elvis Presley film) because of Robert J. Bronner‘s monochrome scope lensing. But you have to know which films have been shot this way — DVD jacket covers never tell you. 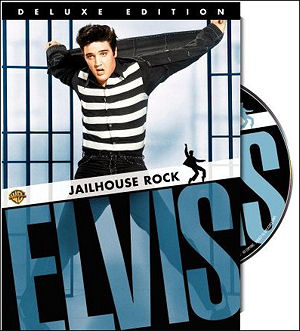 Woody Allen‘s (and particularly Gordon Willis‘s) Manhattan is one of the more glorious manifestations. Other top-of-my-head faves are Robert Rossen‘s The Hustler, Francois Truffaut‘s Jules et Jim and Shoot the Piano Player, Jack Clayton‘s The Innocents, Joseph Losey‘s The Damned, Robert Wise‘s The Haunting, Jack Cardiff‘s Sons and Lovers, Akira Kurosawa‘s High and Low, Luis Bunuel’s Diary of a Chambermaid, Michelangelo Antonioni‘s L’Eclisse, Martin Ritt‘s Hud, etc.
Black-and-white has been commercially dead for decades. Philistine tastes in movies have long stipulated that everything made for theatrical has to be in color — it’s a settled issue. My kids have always hated monochrome films, and even now they’ll groan slightly if I pop one into the DVD player. Black-and-white scope is doubly perverse in this sense, I suppose, but I so miss it. For this reason I can’t wait for the Control DVD to come out early next year so I can buy it and keep it forever.