Newark Star Ledger critic Stephen Witty asked last night if The Invasion (Warner Bros., 817) could be read as a metaphor about Nicole Kidman‘s experience with Scientology and Tom Cruise. 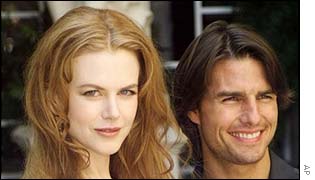 Kidman, after all, is “playing an ambitious working woman and devoted mother who — some years back — had a really ugly divorce from her dark, narcissistic husband,” Whitty observes. ” Who has now re-entered her life, accompanied by a hive-like entourage of humorless, robotic friends.
“Add into the mix that Kidman’s character — unlike earlier versions of Invasion of the Body Snatchers, in which the hero was a physician — is a psychiatrist. Worse, she’s that bete noire of Scientologists, a drug-dispensing psychiatrist — one who even prescribes mood-altering medicines to her own kid.
Whitty acknowledges that The Invasion, “nominally directed” by Oliver Hirschbiegel, “went through a massive post-production overhaul by the V for Vendetta team, which makes crediting anyone with anything fairly suspect. [And yet] the bland villains in this movie looked an awful lot like the folks giving those ‘free stress tests‘ just outside the movie theater. And the scene where Kidman knocked her on-screen husband out cold drew the biggest — and happiest — cheers of the screening.” 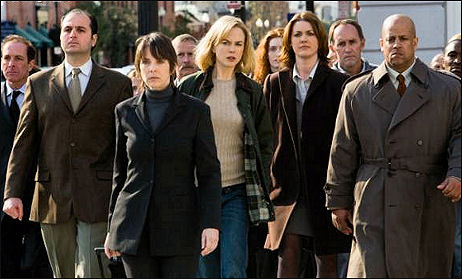 And of course, the Munich-born Hirschbiegel was reared in a country with a government currently known for its anti-Scientology views and policies. I’m obliged to be silent about The Invasion until Friday morning, but given the other socio- political echoes and allusions in this film, it will be fun trying to sort out whether these were included in the Hirschbiegel version of The Invasion (Dave Kajganich is the credited IMDB screenwriter) or whether they were more from the hand of the Wachowski Brothers, who allegedly re-scripted and re-shot the Hirschbiegel version by more than 50%.