A strange call by Cate Blanchett (or her people) to back out of doing a photo shoot for the annual Vanity Fair Hollywood issue, as reported by Jossip. Strange because during the one- or two-day period when this issue first makes the rounds and (briefly) affects a certain percentage of industry types, a truly luscious high-style photo of an actress tends to underline and double-ratify her elegant X-factor intrigue rating. 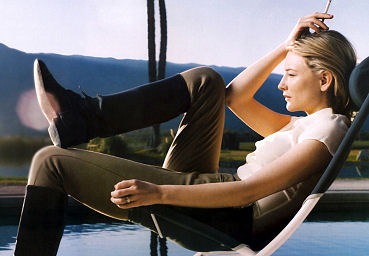 If you’re generally regarded as, say, an 8.2 on the desirability meter based on your own steam, appearing in the Vanity Fair Hollywood issue (providing, of course, that the photo hits exactly the right note, as the photos in this issue tend to do about 90% of the time) automatically kicks you up at least .5 percentage points. For one or two days, I mean…after which everything settles down and finds its own level again. But amazing things can happen within those one or two days.
Jossip reports that Blanchett’s “official excuse for leaving Graydon Carter‘s mag behind is that she has a “scheduling conflict’ — which, of course, is bullshit. The only speculation Jossip managed to dig up is that she “may be sticking by Babel co-star Brad Pitt, who’s on rocky terms with the rag after it managed to turn him into a cover story through a backdoor ‘Art Issue’ excuse.” Memo to Jossip editors: it’s spelled “femme fatale,” not “femme fatal.”
Update: I asked Blanchett about this at today’s Good German junket round table, and she said she knew nothing about it.