The problem with Fernando Meirelles‘ Blindness, which screened this morning at the Cannes Film Festival, is that the milieu of the story, which is based on a novel by Jose Saramago, is bleak and confining. It’s more than just the milieu, actually. The second and third act of this film delivers a kind of lockdown vibe. 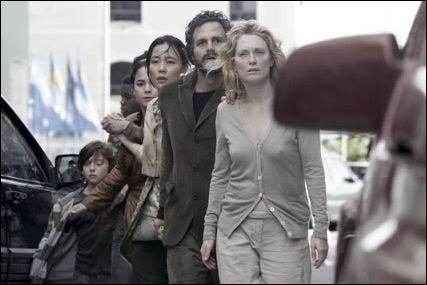 A darkly emotional mood piece about of an outbreak of mass blindness, Blindness constitutes a blunt metaphor about how a pervasive lack of sight (i.e., perception, understanding) makes beasts or slaves of us all. Yes, agreed, of course…but this is basically an insane asylum drama — most of it taking place in a squalid prison in which the victims of said blindness plague have been quarantined — and as such produced, in me, a deep hunger to escape. Imagine a melodrama about blind people set inside the New Orleans Astrodome after Hurricane Katrina, after the toilets stopped working.
Not having read Saramago’s book (or even having taken the time to to read reviews), I had gathered — presumed — that Don McKellar‘s screenplay adaptation would be about the widespread societal effects of a blindness epidemic. I was envisioning a kind of docudrama-like portrait of what happens when sight goes. Some kind of capturing of the logistical, political and even mundane results. I was hoping especially for a film that would rigorously avoid any attempt at pushing metaphor into viewer’s faces. That is precisely what this film does by way of a narration voice-over by costar Danny Glover. This is mistake #1.
Mistake #2 is setting most of the film inside the “blindness prison,” as it were. I know, I know…we’re all living in a prison because we can’t or won’t “see,” but I really, really didn’t want to be stuck in this filthy hell-hole, and particularly being forced to witness the cruel and tyrannical thug behavior of the blind brutes (led by costars Gael Garcia Bernal and Maury Chaykin) as they humiliate and brutalize the reasonable blind people (opthomologist Mark Ruffalo, his wife Julianne Moore, call girl Alice Braga, random victim Yusuke Ilseya, old man Danny Glover and so on).
It’s well directed as far as it goes, although I found the constant depictions of “white-out” blindness irritating. In actuality as well as generic cinematic depictions, blindness is a state of darkness — blackness — and so Meirelles and cinematographer Cesar Charlone , looking for a little stylistic intrigue, have gone in the other direction. I understood the why of it, but it began to tick me off after the eighth or ninth white-out.
Two or three people clapped at the end of the press screening. The reception at the press conference was on the muted side. The movie, I fear, is going to be generally “meh”-ed when it opens, and audiences are almost certainly going to steer clear. I respected Blindness — I certainly agree with what it’s saying — but it didn’t arouse me at all. Opening-night films at big festivals are often underwhelming on this or that level — bland, suckish, so-so. I’m sorry to be saying what I’m saying as I worshipped Meirelles’ City of God and very much admired The Constant Gardener. But the truth is that Blindness is more than a bit of a flub.
For what it’s worth, the pacing, performances and tech credits are first-rate.