The just-out Raging Bull Bluray “produces a more subtle visual improvement than many are used to seeing in high-definition,” writes DVD Beaver’s Henrik Sylow. “The contrast is superior” but “much more of the intended grain is [also] noticeable.” I remember the raw deglammed look and murky sound of Raging Bull when I first saw it at Manhattan’s Beekman theatre in 1980, so I know what the idea was back then and what this new Bluray is trying to recapture. 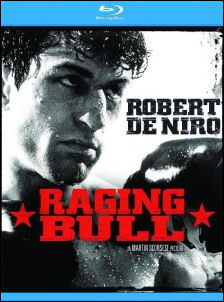 An avoidance of “pretty” was key. Scorsese wanted a flat visual representation of the primitive life of the LaMottas of the Bronx and Pelham Parkway, and no allowances whatsoever for sexy, satiny monochrome. I got it and the Beekman certainly projected that, but I was also gratified, frankly, when Raging Bull was cleaned up and enhanced on DVD three and a half years ago.

I’m not sure I want a Bluray that’s going to take me back to the Beekman. Who wants to shell out for a Raging Bull that provides a preponderance of grain and speckles? I’ll tell you who. The monks do. The Glenn Kenny/Dave Kehr crowd.

I was quite happy with the ’05 Raging Bull special edition DVD because it made the film look sharper and more silvery than ever before without sacrificing, obviously, the essential New York cruddiness of the thing. The textural pleasures of Raging Bull were captured by Michael Chapman‘s photography and Phil Abramson and Frederic C. Weiler‘s sets, and not by the diminished projection standards that existed 28 or 29 years ago.

The ’05 DVD also allowed me to hear Raging Bull much more clearly. Some of Joe Pesci‘s quiet dialogue scenes in the print that I saw projected at the Beekman (or at the Sutton on 57th Street) were so faint I was cupping my ears half the time. 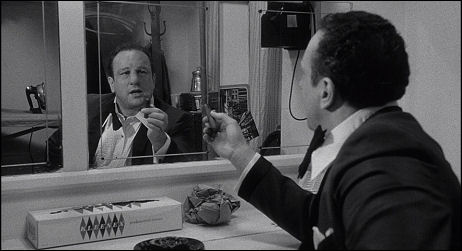 The sound is presumably first-rate on the Blu-ray Bull but the visual trend among the high-end Blu-ray aesthetes, apparently, is to rough up the transfer and bring out the grain and speckles and whatnot — to avoid creating some arid digital upgrade in favor of a recreation of a somewhat worn celluloid print showing in the early days of the Reagan administration.

“The biggest differences,” Syklow says, “are the contrast and grain while I was a bit surprised at the amount of speckles.” And yet, he says, the Blu-ray is “far and away the most film-like image and faithful to theatrical of all editions.” The question is what does he really mean by “film-like”? Neighborhood theatre film-like (i.e., vaguely shitty) or Columbia screening-room quality (i.e., as good as it gets). I get a little bit scared when I hear grain-purist types say this. Because they live on a different planet.