I wrote the guy (i.e., “bobfilm”) who tipped me about last night’s Master screening at the Aero and asked “were you there?” and “whadja hear?” It’s now 4:49 am and he’s written back as follows: “I’m still digesting everything I saw, but it was pretty amazing. It was like a strange fever dream. [But] not audience friendly AT ALL. An ambiguous ending and not one likable character. And without any ‘milkshake’ lines, it probably won’t have the breakthrough that There Will Be Blood had. 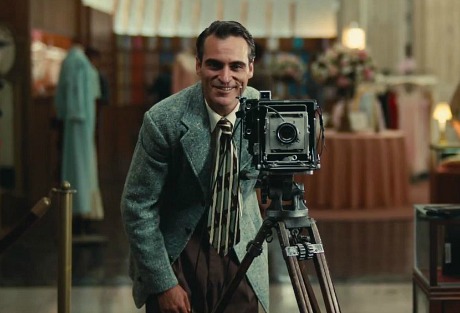 “There are three or four scenes between Phoenix and Hoffman that are barn burners. It also containts the best work Amy Adams has ever done.

“Phoenix WILL win Best Actor unless Daniel Day Lewis blows us away with [his] Lincoln performance. This is Raging Bull territory for him. Believe it or not, his performance is stranger than that fake doc he made. The only way I can describe him is ‘animalistic.’ (I think the Master title refers to more of a dog and his master. At least that was the vibe I got).

“The style feels like Terrence Malick by way of There Will Be Blood. Wish you could have been there!”

Here are some brief reactions from a film site called Movie Parliament. Samples: (a) “Amazing…Oscars all over this one“; (b) “If it were me, I’d put them both [Pheonix and Hoffman] in the Best Actor category but if one them is getting the supporting nod, it’s Hoffman” and (c) “Will get nods for Picture. Good chance of winning original screenplay and acting awards.”

“Yes, I was there. Paul Thomas Anderson was there with his wife Maya Rudolph. I saw him lingering in the back before The Shining started. But I just assumed he was there for the film. So before The Shining, they announced that there would be a mystery 70mm movie projected as a second feature.

“Once The Shining was over (the newly created DCP looked incredible) they told us it was The Master. We then had to wait outside for about a half-hour and then were let back in. No opening titles other than production logos and The Master. No end titles. Not sure of the exact running time, but it was close to 2 hours and 30 minutes.”