On the occasion of the 40th anniversary of Warren Beatty and Arthur Penn‘s Bonnie and Clyde, three thoughts from A.O. Scott in the 8.12 N.Y. Times about how this 1967 Warner Bros. movie broke Hollywood’s depiction-of-violence dam and introduced the idea of hip carnage with one fell swoop — a horrific and exhilarating machine-gun massacre scene at the finale: 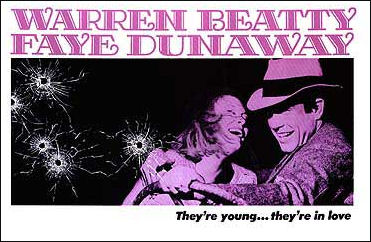 Thought #1: Bonnie and Clyde‘s “hero and heroine [played by Beatty and Faye Dunaway] exist in a state of vague solidarity with the poor and destitute — the banks they rob are the real enemies of the people, and they are admired by hard-luck farmers and sharecroppers — but they themselves are much too glamorous to pass as members of the oppressed masses.
“They are not fighting injustice so much as they are having fun, enjoying the prerogatives of outlaw fame. They exist in a kind of anarchic utopia where the pursuit of kicks is imagined to be inherently political. In this universe the usual ethical justifications of violent action are stripped away, but the aura of righteousness somehow remains.”
Thought #2: Since Bonnie and Clyde‘s ascension as a hip vanguard movie that brought forward a new-at-the-time screen sensibility, “Not Getting It has been the accusation leveled against critics of a certain kind of movie violence by its defenders. The easiest way to attack movie violence is to warn of its real-world consequences, to worry that someone will imitate what is seen on screen. The symmetrically literal-minded response is that because violence already exists in the world, refusing to show it in movies would be dishonest.

“[But] neither of these positions quite acknowledges the particularity of cinematic violence, which is not the same as what it depicts. Even the most bloodthirsty moviegoer would be likely to leave a real fusillade like the one at the end of Bonnie and Clyde sickened and traumatized, rather than thrilled. The particular charge of that scene, and others like it, is that it tries to push the pretense — the art — as close to trauma as possible and to make the appreciation of that art its point. Missing the point is what marks you as square.”
Thought #3: “I still get a kick out of Bonnie and Clyde, but it’s accompanied by a twinge of unease, by the suspicion that, in some ways that matter and that have become too easy to dismiss, Bosley Crowther was right.” What Scott means, I think, is that Crowther, square that he was, may have recognized “the real-world consequences” that Bonnie and Clyde‘s finale would bring about in terms of endless imitation and can-you-top-this? violence.
One final thought — a passage that Scott quotes from Pauline Kael‘s defense of that argued strongly with Crowther’s tut-tuttish slam: Bonnie and Clyde, she wrote, “brings into the almost frighteningly public world of movies things that people have been feeling and saying and writing about. And once something is said or done on the screens of the world, it can never again belong to a minority, never again be the private possession of an educated, or `knowing’ group.
“But even for that group there is an excitement in hearing its own private thoughts expressed out loud and in seeing something of its own sensibility become part of our common culture.”