The general awareness and definite interest levels about the hottest, funniest, most out-there comedy of the year — that would be Borat: Cultural Learnings of America for Make Benefit Glorious Nation of Kazakhstan (20th Century Fox, 11.3) — are kind of “meh” so far. With Average Joes, I mean. The people who only focus on movies coming out this weekend (as opposed to two or three weekends from now), the ones who went to see Texas Chainsaw Massacare: The Beginning instead of The Departed two weekends ago…that crowd. 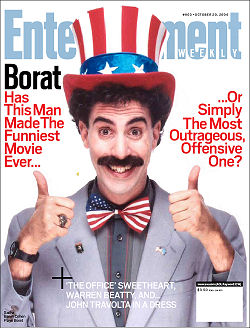 It goes without saying that awareness and interest levels are through the roof with media, industry, ubers and early-adopter types — Borat has been heavily buzzed and written about since breaking out at the Toronto Film Festival — but otherwise it’s looking like it may be a little too hip for the room,”the room” being pretty much everyone else.
Maybe Sacha Baron Cohen‘s goofy-dry put-on humor only travels with a certain clientele. Maybe people are starting to hear that Borat is basically about Cohen’s Kazakhstan culture reporter goofing on Middle Americans and maybe that’s not going down so well with some. Or maybe they just haven’t tuned in yet.
I’m not saying Borat is cruising for a buising. I’m saying as of right now that a not-big-enough group is saying, “Oh, yeah, I know that film….looks good!…I’ll be in line!” It’s not doing terribly and awareness and interest levels will certainly climb between now and 11.3, but right now it’s not doing all that great. And it opens only two weeks from this Friday. And it’s rated R.
The good news is that Borat‘s only 11.3 competitors are two family-trade films — Disney’s Santa Claus 3: The Escape Clause (almost guaranteed to be the #1 film that weekend) and DreamWorks’ Flushed Away. Pedro Almodovar’s Volver, one of the year’s great films, is only opening in New York and L.A.
The fact that Borat is unusual means “it’s not falling into any kind of model,” a senior Fox publicist told me earlier today. “Among the intelligentsia, media, industry…everybody’s buzzing about it. And in terms of word-of-mouth screenings, [the numbers] have grown and grown, and they’re continuing to grow. Lately we’ve had turnaways at screenings. Thing is, this is about all real people” — Borat interviewing regular folks who aren’t in on the joke — ” but it’s not a documentary.”
And so some people aren’t sure what it is (yet) and are going “hmmmm.” But that can change. The usual TV ads, trailers in theatres, more magazine and web articles, more word-of-mouth screenings, etc.
Nikki Finke ran a piece about the Borat deal a little earlier than me, but I didn’t catch it until after I wrote my own so there you are.