At a San Franciso Film Festival seminar last April I asked legendary editor Walter Murch (Cold Mountain, Apocalypse Now, The Unbearable Lightness of Being, The Talented Mr. Ripley) about machine-gun cutting in action movies, and at what point does it get to be too much? I was thinking at the time of the editing in 2004’s The Bourne Supremacy, portions of which had driven me crazy. Murch said audiences do indeed start to go crazy if you use more than 14 set-ups per minute. 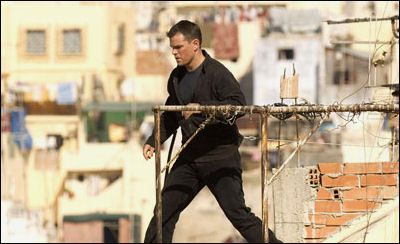 One can obviously cut back to the same set-up — a visual point of view — within a given minute, so Murch wasn’t saying only 14 cuts every 60 seconds. Nor was he necessarily putting a limit on the number of cuts per set-up. But let’s say for the sake of simplicity that during an action sequence you use two cuts per set-up — by Murch’s rule that would mean no more than 28 cuts per minute, or a little more than two seconds per cut. That sounds too frenzied, doesn’t it? But maybe not.
In an 8.2 Hollywod Reporter interview, Carolyn Giardina has spoken to to Bourne Ultimatum editor Christopher Rouse and producer Patrick Crowley about the mathematics of cutting in their new film.
Variety‘s Todd McCarthy has reported The Bourne Ultimatum‘s running time as 115 minutes. Subtract seven or eight minutes of opening and closing credits and you’re down to 107 minutes of actual footage. Crowley tells Giardina that Ultimatum has “about 4000 cuts.” Divide those 4000 cuts by 107 minutes and you’re left with 37 cuts per minute, or a cut every one and two-thirds seconds.
Crowley doesn’t say how many set-ups were used in Ultimatum so there’s room for interpretation, but if you go by Murch’s rule — no more than 14 set-ups per minute — and then a hypothetical 28 cuts per minute if you use two cuts per-set-up, Ultimatum has been cut more than 25% faster. 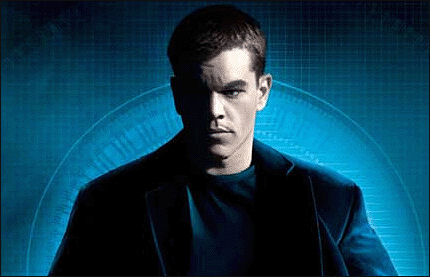 In other words, according to one interpretation of Murch’s law, The Bourne Ultimatum is going to drive a lot of people crazy. Only it doesn’t. This is probably due to the set-up count. Perhaps Rouse is cutting back and forth between only seven or eight set-ups per minute, or nine or ten. A lot of the film is obviously fluid and moving and hand-held. To repeat, Murch’s law is about not laying too many cuts on an audience within a given minute, but too many points of view.
The funny part is that The Bourne Supremacy was cut slower — 3500 cuts, according to Crowley — and yet it irritated me here and there. During the three or four high-velocity stand-out sequences, that is. And yet Ultimatum, for whatever reason, isn’t irksome at all.
Supremacy ran 109 minutes, so take away 7 or 8 minutes for credits and you’re left with 102 minutes. 3500 cuts means a little more than 32 cuts per minute, or a little more than one every two seconds.