In the Bourne movies, Matt Damon “looks like a bullet [with] short hair, no stubble to speak of, and a blunt nose,” New Yorker critic David Denby observes. “In violent scenes, his eyes go dead, and he has a strong, compact body, which he hurls through the frame, ricocheting off walls, windows, cars, and fences. As Damon plays him — silent, wary — Bourne thinks with his body. He seems to have sensors attached to his limbs and his head, and he reacts instantly to threats. 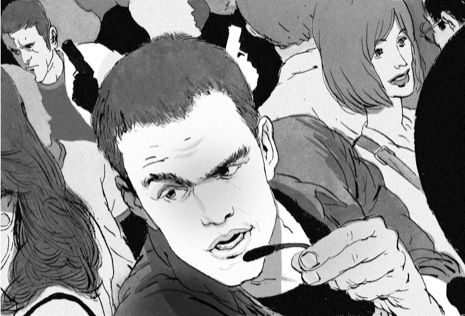 “I used to be a purist about action sequences, demanding that bodies in combat be seen in full frame and without too much cutting. A few directors are still capable of that kind of classicism (Wolfgang Petersen in Troy, David Cronenberg in A History of Violence), but Paul Greengrass, who also made the superb United 93, shoots scenes in tiny fragments, and when he does it I see the point — the gain in speed and power is extraordinary.
“The camera trembles and shakes and hurtles in Ultimatum, as if we were trapped inside the moving Bourne, and yet, on the fly, we see what we need to see. Gathering the fragments, Greengrass keeps some of the chase scenes going for ten minutes at a time. You come out of the movie both excited and soothed, as if your body had been worked on by felt-covered drumsticks.”