A highly questionable source informs that a select group of 1.85 fascists met in Manhattan this morning to discuss the impact of Acorn Media’s Tinker Tailor Soldier Spy Bluray (4.24), which will be presented in its original 1.33 to 1 aspect ratio. The source surreptitiously recorded part of the meeting and provided a transcript. 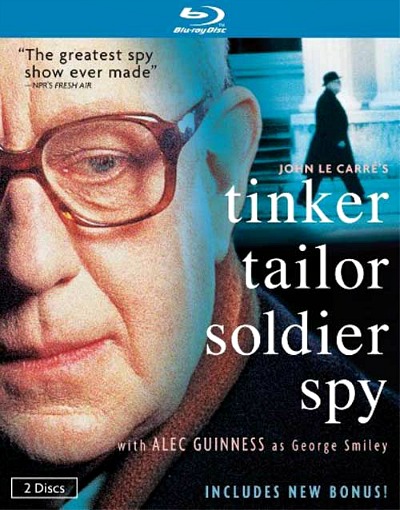 Fascist #1: So what’s this about again? I don’t have a lot of time.

Fascist #3: Neither do we but…please, sit down. This’ll just take a moment.

Fascist #2: It’s just a concern we have about 1.33 or 1.37 in general. As illogical as it might sound, we have to enforce a standard. I think we really have to nip this kind of thing in the bud. We have strong connections with the folks at Criterion and with C.C. Baxter and Glenn Kenny, and we’ve maintained cordial relations with Robert Harris.

Fascist #2: Between this and the Masters of Cinema dual-aspect-ratio release of Touch of Evil…I’m just saying that if we don’t do what we can to block this, things could get out of hand.

Fascist #1: What are you guys so threatened about? We’ve got the world thinking that almost all non-Scope films exhibited after 1953 should be shown at 1.85 or 1.78. C’mon, we’ve won!

Fascist #3: “Winning” isn’t enough. We have to exterminate every last dissenter.

Fascist #1: A couple of nutters like Jeffrey Wells are the only ones screaming about this, and nobody listens to Wells anyway. 1.85 or 1.78 rule the roost so what difference does it make if Acorn puts out a 1.33 aspect ratio Bluray now and then?

Fascist #2: And if someone else releases a 1.33 Bluray of a United Artists film for some perverse reason, we just…what, say nothing?

Fascist #3: If we’re going to control this thing, we’ve got to really control it. It has to be 1.78 or 1.85 all the way. No exceptions. It took us a long time to win over Leon Vitali on that 1.78 Barry Lyndon Bluray — that was a major victory. Do you think that just happened?

Fascist #1 (getting up, putting on coat): You guys do what you want. I think you’re being excessive. I have to take my daughter to a swimming lesson. Have a nice Saturday.

From the TV Shows on DVD copy: “After releasing it on DVD format in 2002, 2004 and 2011, and following the popularity of the recent film remake starring Gary Oldman and Colin Firth, Acorn Media has decided to release the 1979 BBC mini-series Tinker, Tailor, Soldier, Spy in high-def Blu-ray Disc format.

“Available at general retail on April 24th, the 2-disc set with all 6 episodes starring Alec Guinness (Star Wars, The Bridge on the River Kwai) for $59.99 SRP in the USA, and CA$74.99 SRP in Canada. Running time is 324 minutes for the main feature, which is presented in the original full screen 1.33:1 video aspect ratio, but at a 1080p resolution. Audio is English 2.0 Dolby Digital, and English subtitles are also on board.”