Branagh vs. Serkis in Supporting?

With this morning’s announcement about Simon Curtis‘ My Week With Marilyn (Weinstein Co., 11.4) having been chosen as the Centerpiece for the 2011 New York Film Festival, Manhattanites will get an early look at what I’ve been told is an extraordinary, highly enjoyable Kenneth Branagh performance as Laurence Olivier. 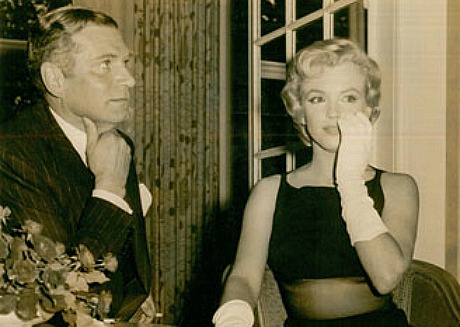 Laurence Oliver, Marilyn Monroe sometime during the moderately hellish ordeal that was the making of The Prince and the Showgirl.

Last April an HE reader attended a New York research screening of Curtis’s film, which stars Michelle Williams as Marilyn Monroe, and had this to report:

“Branagh is the surprise of this,” the guy wrote. “He’s wonderful as Laurence Olivier — just brilliant. Like Williams, he doesn’t look much like his real-life character but unlike her, he’s aided by superior writing. He also perfectly mimics Olivier’s facial mannerisms and voice and hamminess to the extent that you forget you’re looking at Branagh. He steals every scene he’s in and is the reason to see this movie.”

So in the Best Supporting Actor race, it beginning to seem probable if not likely that it’ll be Branagh vs. Rise of the Planet of the Apes‘ Andy Serkis.

Why can’t I find a decent shot of Branagh-as-Olivier in this film? It wrapped last winter and not a single JPEG has turned up online. What’s that about, Sarah or Pantea?

My Week With Marilyn is based on two books by the late Colin Clark about Clark’s relationship with Ms. Monroe during the making of The Prince and the Showgirl, which was released in 1956.

August 4, 2011by Jeffrey Wells18 Comments
« Previous post
Enough With The Lunches
Next post »
Died With His Helmet On