A couple of hours after Clint Eastwood‘s press conference last Saturday, I wrote that his latest film, Flags of Our Fathers (Dreamamount, 10.20), is a mature and very soulful meditation piece with its head and heart in the right humanistic place. It definitely is that…but I’m afraid this isn’t enough.

It’s not what it’s saying but how it says it that creates the problem for Flags of Our Fathers. It’s a fairly decent film and not a tank, but it’s not that satisfying because of a lack of strong story and strong characters, and because Paul Haggis‘s script is too diffuse and back-and-forthy.
Last April I wrote that Haggis’s script “is a sad, compassionate, sometimes horri- fically violent piece that’s essentially plotless and impressionistic and assembled like a kind of time-tripping poem — a script made from slices of memory and pieces of bodies and heartfelt hugs and salutes from family members and politicians back home, and delivered with a lot of back-and-forth cutting.
< ?php include ('/home/hollyw9/public_html/wired'); ?>
“So it’s basically a montage thing that’s obviously more of an art film than a campfire tale, and that means that the sector that says ‘give us a good story and enough with the arty pretensions’ is going to be thinking ‘hmmmm’ as they leave the screening room.”
That seems to be what’s happening now among some who’ve seen Flags. But not among everyone. Three major voices — Emanuel Levy‘s and two guys who have yet to post their reviews — are fans, but I know of at least one major critic back east who’s feeling disappointed so let’s see how it all shakes out.
Some day down the line someone on YouTube is going to re-cut Flags of Our Fathers, take out the footage of Doc Bradley‘s grown son interviewing his dad’s war buddies in their 80s and all the narration, and then blend it with Letters From Iwo Jima, Eastwood’s forthcoming Japanese version of the same battle, into some- thing more linear and, I’m betting, truly hard and ferocious — a film that cuts back and forth between foes, revealing both sides and both cultures…and just lets the raw truth of that battle speak for itself. 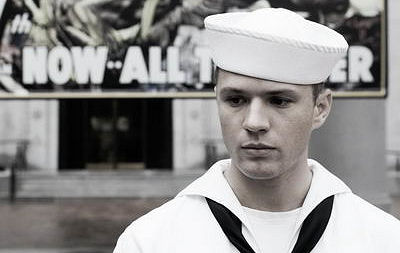 Flags has many admirable things in it, but it doesn’t really make it as a unified entity. Leaving aside the son writing the book, it tells two not-very-strong stories — one about how the battle of Iwo Jima went for Doc Bradley (Ryan Phillipe) and his Marine buddies, and another about a fund-raising that tour that Bradley, Ira Hayes (Adam Beach) and Rene Gagnon (Jesse Bradford) were taken on after they and three others helped raise the U.S. flag atop Iwo Jima’s Mt. Surabachi — especially after a photo of this historic moment was published around the world.
The fighting scenes, no question, are more involving than the fund-raising tour scenes, and I know that the blending of these doesn’t build or gather much force as the film moves along. Eastwood’s unadorned style — his plainness and lack of pretension, just shoot it and move on — doesn’t work for him as well this time. Maybe if the story was more linear. Hard to say, easy to take shots.
I do know that the preparation-for-battle scenes feel bland and perfunctory, and so are the p.r.-tour-in America scenes. The battle scenes are the only real rock ‘n’ roll, but even these aren’t what anyone would necessarily call staggering. They’re very strong and intense, but they’re not legendary or mind-blowing because, frankly, they don’t put anything really new on the table. The ghost of Steven Spielberg‘s Saving Private Ryan haunts this film like Jacob Marley. 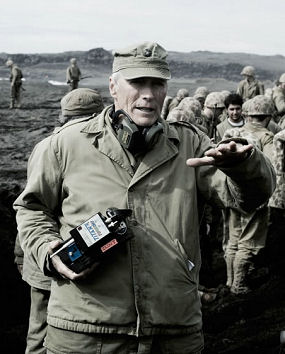 It seemed to me that the same points — all the top military p.r. guys care about are speeches and ceremonies and raising money, they don’t get what it was like over there, war is horrific — are made over and over. And except for the last five or ten minutes, which are okay but no great shakes, it stays on this same level all the way through. The narration (some of it read by Harve Presnell, who plays one of the elderly vets) that read nicely on the page — it was succinct and yet natural sounding — seems unnecessary and on-the-nose in the film. The movie isn’t saying “make of this what you will” — it’s spelling everything out.
Beach’s Hayes character is the only character with any poignance. He has a big weeping scene in a hotel room that feels more to me like a good try than a profound emotional touchstone. I felt Hayes’ pain, but I began to wonder after a while if he wasn’t just a weak sister who didn’t have a strong family upbringing and simply had a natural susceptibility (as some men do) for alcohol. It was distasteful and offensive and a dishonoring of the dead for the U.S. to launch that p.r. tour and take part in all that p.r. crap, yes, but was it really all that horrible? Bradley and Gagnon didn’t like it either, but they struggled through.
I think deep down that something told Clint he didn’t have as good a film as he thought he had in Flags of Our Fathers, and that’s where the idea of Red Sun, Black Sand — the film now called Letters From Iwo Jima — came from. Somewhere down in the core of his creative heart be knew he hadn’t quite captured the mother- lode with Flags, and a notion came to mind that there might be something better — something exotic and nervier, perhaps more poignant — in the story of the defending Japanese soldiers. These were young men who knew they probably wouldn’t leave that island alive, who had families waiting back home, who were just as terrified as the American soldiers, etc, 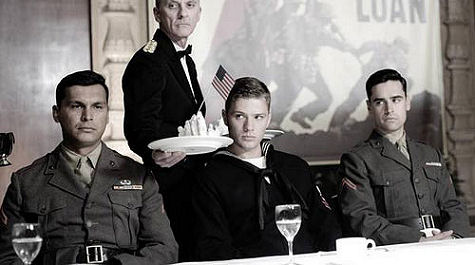 The Japanese movie is going to save the situation or not. It would be better, Oscar- wise, for it to be released this year instead of just Flags of Our Fathers on 10.20. It may or may not be the movie that turns the situation around, but I know this: Flags of Our Fathers doesn’t have a powerful right hook and doesn’t even box all that well, and even with the aura of this being Clint’s latest and all, I’m not sure its even going to wind up as a Best Picture nominee.
If it ends up with a nod, fine…but I really don’t think a Best Picture trophy is in the cards. Clint has proved over and over he’s a sublime filmmaker, but now and then even the best pitchers miss the strike zone.
There are obviously a lot of people in this town who reflexively half-bow their heads when Eastwood’s name comes up. I didn’t use to be one of these stone worship- pers, but I joined their ranks after Bridges of Madison County, I became a choirboy after Unforgiven, and I became a deacon after Million Dollar Baby. But Clint is not God, and not every single thing he touches turns to gold. Due respect, but this time I’m outside the church.
So let’s hear it from the other team. This year, I mean. Because right now the only thing that will save matters is a Hail Mary pass.