Daily Show host Jon Stewart yesterday told his would-be political base — i..e, the people wearing “Stewart/Colbert ’08” T-shirts — to forget about himself and Colbert Report host Stephen Colbert making a run for the White House, a la Robin Williams in Barry Levinson‘s Man of the Year (Universal, 10.13). 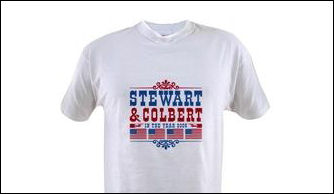 Stewart told New Yorker editor David Remnick on Sunday (10.8) that the T-shirts “are a real sign of how sad people are” with the Bush administration and the general drift of things. “Nothing says ‘I am ashamed of…my government’ more than ‘Stewart/Colbert ’08.'”
Just for the record — were the “Stewart-Colbert” T-shirts in any way inspired by Man of the Year, a comedy-drama about a Jon Stewart-like host being elected president, or have they been happening for, say, six months or longer? I ask because people started began talking and hearing about Man of the Year late last year, and interest in the film started cranking up in July-August.