Michael Wilson and Barbara Broccoli, the caretaker producers of the 007 films who are regarded industry-wide as stooges and “stoppers”, are apparently back to their tricks by trying to take the brutish edge off of Daniel Craig‘s James Bond character in Bond #22, which Marc Forster will direct. Take a moment to slap yourself hard on the side of the head. Craig’s rough brutish edge is precisely the thing that made Casino Royale feel fresh and revitalized. 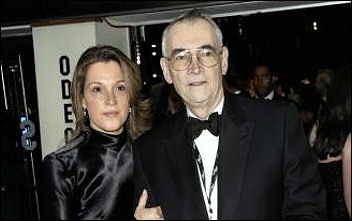 “They just want more gags,” Craig says in the 7.13 edition of the Daily Express, referring to Broccoli-Wilson “The next one’s going to be a lot funnier…Octopussy and Pussy Galore-style style gags. They’re all great names, but that’s the thing — the Bond jokes will be flipped on their heads.”
Wilson-Broccoli’s dislike of a non-Roger Mooreish, blunt-weapon Bond was indicated when director Roger Michell decided against directing Casino Royale due to “creative differences.” This translated into Michell wanting “an element of cruelty [in the Bond character]…certain things he does should be questionable…I think you should go, ‘Fuck, that’s not nice”, and Wilson-Broccoli being against this, as I reported in this ’06 story.
In my review of Casino Royale last November I noted that “the whole shaken-not- stirred, sexual-smoothie-in-a-tuxedo, Walther PPK stud-with-a-quip thing has been thrown out the window, finally and praise God. The influence of producers Michael Wilson and Barbara Broccoli is finally dead, dead…and ding-dong to that! Wilson-Broccoli have naturally been trying to sell the notion they were four-square behind this new incarnation, but don’t buy it. They’ve been the invisible-car bad guys — stooge caretakers — since they grabbed the reins in the mid ’90s. The startling coolness of this new film happened in spite of Wilson- Broccoli, not because of them.
Broccoli-Wilson own (or co-own) the franchise and can’t be fired. So, as I’ve suggested in the past, the best thing to happen to the Bond films would be a compassionate kidnapping. Wilson and Broccoli wouldn’t be killed or harmed, but would be gently seized and flown to, let’s say, a remote location in Southeast Asia and made to live in a huge guarded villa. They would be given every last comfort of home — high-def flat panels, private gyms, gourmet meals thrice daily, wifi up the wazoo, sexual slaves at the snap of their fingers — but they wouldn’t be allowed to leave the compound for the rest of their natural lives or exert the slightest influence upon the Bond series ever again.