The LA Film Festival information page for James Franco ‘s The Broken Tower, a black-and-white drama about gay poet Hart Crane, says that “this program contains mature content…no one 17 and under will be admitted.” That’s one way of confirming that the film contains a graphic gay sex scene. It shows tonight at 8 pm at LA LIVE Regal. 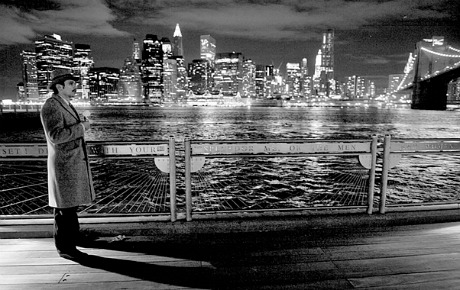 I still don’t have a ticket and no one I’ve appealed to has responded, so I guess my only shot is to wait in the rush line and hope for the best.

The Broken Tower had its very first screening at Boston College’s Robsham Theater on 4.15.11. Here’s a brief video clip of a post-screening chat between Franco and Paul Mariani, whose 1999 biography, The Broken Tower: The Life of Hart Crane, was the basis of Franco’s film. Mariani consulted on the screenplay and had a cameo in the movie as photographer Alfred Stieglitz.

In a January 2011 interview, Franco told EW‘s Keith Staskiewicz that his decision to portray gay characters in three recent films (Milk, Howl and The Broken Tower) and an announced intention to write direct a biopic about gay actor Sal Mineo is more about the quality of the material than any personal inclinations on his part.

Franco nonetheless ended the interview by saying to Staskiewicz, “You know what? Maybe I’m just gay.”

In a recently-posted Vanity Fair article about Crane, Franco wrote the following:

“[Crane’s] poetry was damn difficult, and he knew it. The poems are thick with metaphor, high diction, and compulsive allusions to myth. Not for Crane the accessible American idiom of a William Carlos Williams. He loved Whitman and filled his poetry with references to the modern era, but he wrote more like an Elizabethan. Nobody got it. People still don’t get it, at least not without effort.

Crane’s life was “about being unappreciated, gay, a romantic in an age of modernism. Crane loved movies, and actually likened himself to young adu’s tramp, downtrodden but skillfully using (and disposing of) the mechanisms of the industrial age. Poetry is not a form that is easily adaptable to film, and Crane’s is denser than most. The trip from the page to the screen is a long one. But what is most vital in Crane is the way he lived and his devotion to his work. And it is what I have tried to capture on film nearly 80 years after Crane’s death.”