If only five Best Picture nominees were allowed, which of this morning’s nine nominees would be included? Not The Help — be honest. Not Extremely Loud & Incredibly Close — due respect. Probably not War Horse or The Tree of Life. It’s delightful, of course, that The Tree of Life has been nominated but I’m stunned that 5% of the membership gave #1 votes to the other three. These moves are worthy and commendable in their own way, but they’re #3 or #4 picks.

This morning’s biggest “holy moley” is the Academy’s blowoff of the great Albert Brooks for Best Supporting Actor in Drive and the somewhat surprising inclusion of Max Von Sydow for Extremely Loud & Incredibly Close in the same category. I’ve detected respectful appreciation among Oscar seers for Von Sydow’s performance but little in the way of serious passion.

Cheers to A Better Life‘s Demian Bichir for landing a Best Actor nomination. He did it all by himself. It was almost entirely the performance, I mean, and not the promotion, which was minimal.

Why didn’t they give a Best Sound Editing or Best Sound Mixing to The Artist? Seriously…why not? It has nice music on the soundtrack and the film is so likable and the dog is so cute. 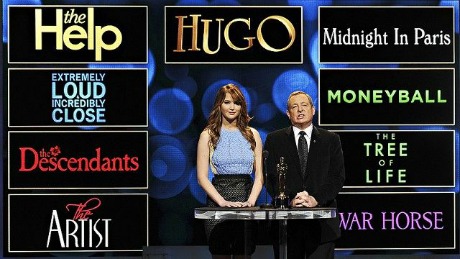 What is the biggest lie in terms of reactions of the nominees? “I was sleeping…my agent/manager woke me up with the good news.”

I have to catch an 8:30 am screening of The Surrogate so I’m outta here. Sasha Stone and I will do an Oscar Poker podcast later this morning.

I didn’t have time to re-code everything so here are the nominations taken directly from Awards Daily:

“The Tree of Life” Nominees to be determined

“The Tree of Life” Terrence Malick

Demian Bichir in “A Better Life”

George Clooney in “The Descendants”

Jean Dujardin in “The Artist”

Viola Davis in “The Help”

Rooney Mara in “The Girl with the Dragon Tattoo”

Meryl Streep in “The Iron Lady”

Michelle Williams in “My Week with Marilyn”

Kenneth Branagh in “My Week with Marilyn”

Berenice Bejo in “The Artist”

Jessica Chastain in “The Help”

Octavia Spencer in “The Help”

“The Girl with the Dragon Tattoo” Jeff Cronenweth

“The Tree of Life” Emmanuel Lubezki

“Hell and Back Again”

“If a Tree Falls: A Story of the Earth Liberation Front”

“The Barber of Birmingham: Foot Soldier of the Civil Rights Movement”

“God Is the Bigger Elvis”

“The Tsunami and the Cherry Blossom”

“The Girl with the Dragon Tattoo” Kirk Baxter and Angus Wall

“The Adventures of Tintin” John Williams

“The Girl with the Dragon Tattoo” Ren Klyce

“The Girl with the Dragon Tattoo”

“Rise of the Planet of the Apes”

“The Artist” Written by Michel Hazanavicius

“A Separation” Written by Asghar Farhadi