“I’m afraid that Bruno feels hopelessly complicit in the prejudices that it presumes to deride,” writes New Yorker critic Anthony Lane. “You can’t honestly defend your principled lampooning of homophobia when nine out of every ten images that you project onscreen comply with the most threadbare cartoons of gay behavior. A schoolboy who watches a pirated DVD of this film will look at the prancing Austrian and find more, not fewer, reasons to beat up the kid on the playground who doesn’t like girls. 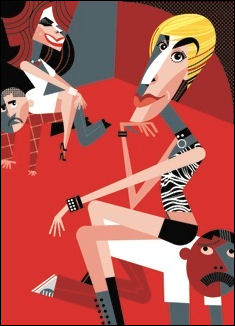 “There is, on the evidence of this movie, no such thing as gay love; there is only gay sex, a superheated substitute for love, with its own code of vulcanized calisthenics whose aim is not so much to sate the participants as to embarrass onlookers from the straight–and therefore straitlaced — society beyond.

“How efficient, though, is embarrassment as a comic device? It’s a quick hit, and it corrals the audience on the side of smugness; but its victories are Pyrrhic, and it tends to fizzle out unless held in by a plot — as it was in Fawlty Towers, which, from its base on the English seaside, fathomed the most embarrassable race on earth.

“Baron Cohen, in exporting his japes, comes up against a people much less devoted to the wince. I realized, watching Borat again, that what it exposed was not a vacuity in American manners but, more often than not, a tolerance unimaginable elsewhere.

“In both cases, I feel that the patsy, though gulled, comes off better than the gag man; the joke is on Baron Cohen, for foisting indecency on the decent. The joker is trumped by the square.”

July 9, 2009by Jeffrey Wells20 Comments
« Previous post
A Wee Bit Boring
Next post »
Back From The Grave