Brian M. Cassidy and Melanie Shatzky‘s Francine, a drama starring Melissa Leo as an ex-con sturggling to find fulfillment, will premiere at the Berlin Film Festival on Monday, 2.13. An Indiewire synopsis says that Leo’s character’s “failure with human connection leads her to seek support from animals, with tragic consequences.” 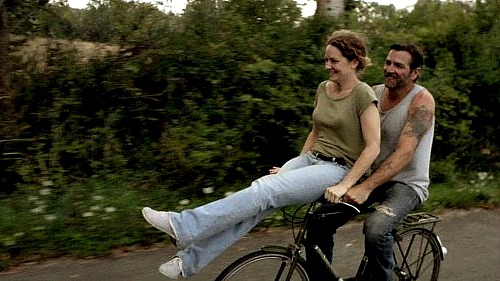 As a writing class experiment, HE readers are requested to take five minutes and explain how a middle-aged woman seeking support from “animals” — obviously a reference to a Calico cat — could lead to “tragic consequences.” Let’s see…the cat is a stray who comes by for food scraps at dinner, and Leo adopts him as her pet. One day she notices some kids tormenting the cat (swinging it around by its tail or something) so she takes revenge on the kids and their parents find out and a violent confrontation results.

Why is Leo pictured as being nude as she’s holding the cat? What that could mean?

The synopsis also says that “her path through life is much like an orbiting satellite: detached, lonely and ultimately destined to crash.”